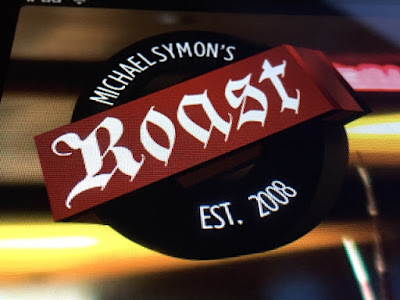 My sisters and I visited family in Michigan in February of this year.  On our last night, we wanted to have a nice dinner in the city.  We came across Michael Symon's Roast in downtown Detroit, located in the Westin Book Cadillac hotel and made reservations for three.  We valeted our rental car and took a walk around the area before dinner.  We took the Detroit People Mover to the Riverfront and saw Windsor, Canada in the distance.  Because it was a weekday evening, there was no one around and if we did not talk, the sound of the ice floating on the Detroit River was so calming to hear. 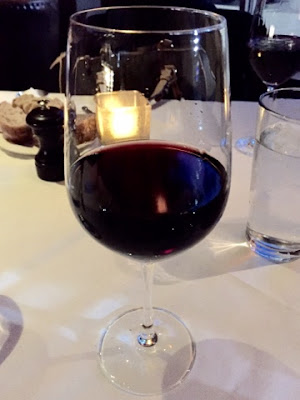 L and I enjoyed a glass of red wine from Argentina:  2013 Paul Hobbs, La Flor, Cabernet Sauvignon, Mendoza, Argentina ($9.00 / glass).  L chose the wine, as her and her hubby, know wines and they are fans of Paul Hobb, aka the Steve Jobs of Wine.  This wine is from his winery, Vina Cobos in Mendoza.  I don't know much about wine (had to look him up), so yeah, go Paul Hobbs! 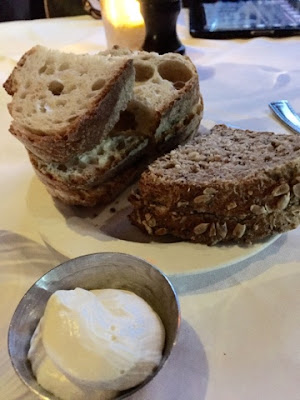 They brought out the bread.  It was a simple bread assortment of rustic white and whole grains.  The bread was soft and the butter was softened, as well.  It is a pet peeve of mine to serve cold butter with bread, especially bread that is not warm.  They did a good job here.

We enjoyed the Roasted Marrow ($10.00) with capers, chilies, oregano, and sea salt.  It was served with thin crostini and pickled red onions.  This was super delicious.  I wish we had ordered two, one for them to share, and one just for me, haha.  Every bite was meaty, crunchy from the crostini, and acidic from the squeeze of lemon and the pickled onion. 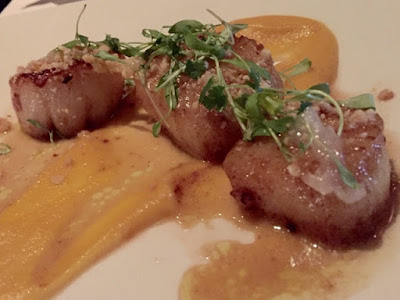 S ordered the Pan Seared Scallops ($28.00) for her entree.  There were seasoned pea tendrils and a schmear of, what I think is, butternut squash puree.  Because her entree was so small, I did not ask her for a taste.  It looked really yummy, though! 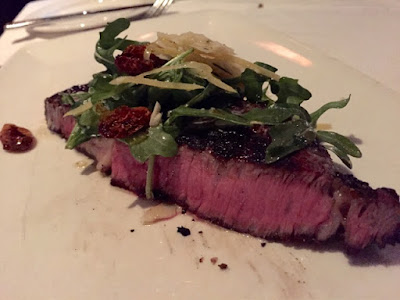 L and  I thought we were being smart and decided to split the Dry-Aged Ribeye ($46.00) for the following reasons:
Big mistake.  I think the steak was a 16 ounce portion (or maybe less?), and we did not ask how many ounces it was before we ordered it.  Don't get me wrong, the ribeye was delicious.  It melted in my mouth and the addition of the little lemony arugula salad with sun dried tomatoes, made it more savory and yummier.  It just left us wanting more.  Now we know.  Own steaks. 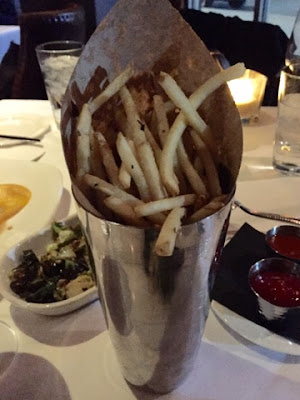 We ordered the Rosemary Fries ($6.00), which was really good.  I wish they were crispier, but I always love a good steak and fries/frites. 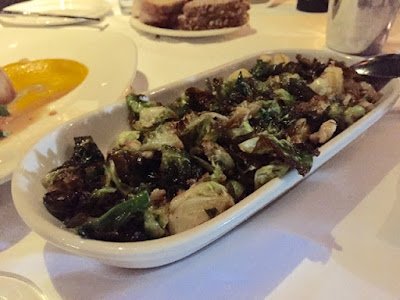 We also had the Brussel Sprouts w/ Walnuts ($10.00).  They had a nice char from the roasting that gave it extra flavor.  I always enjoyed eating brussel sprouts.  I see them as mini cabbage.  They just have to be cooked right.  These were definitely cooked nicely.

Overall, my sisters and I really enjoyed family time in Michigan and spending our last evening there at Roast.  It was a lovely meal with a great atmosphere and friendly staff.

Nice blog and great pics ! Thanks for sharing

Aw, thanks, Mindy! I appreciate the visit!