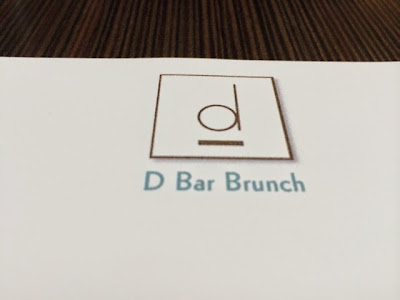 For my birthday, my girlfriends and I, along with our hubbies, met at D Bar for brunch on a Sunday early afternoon at 11:00am.  I have always wanted to go to Chef Keegan Gerhard's D Bar after reading about it on multiple food blog sites, like Mary's and especially after seeing Chef Keegan host the Food Network Challenges.  It was perfect that none of us have visited yet, so it was a celebration for all, haha. 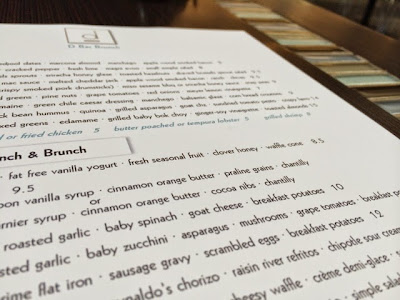 I'm telling you.  If I opened a restaurant, it would probably look like D Bar's.  From the decor to the color scheme (light blue and chocolate brown were my wedding colors), the square logo (my wedding theme was contemporary square - everything was in a square shape)... I was in love. 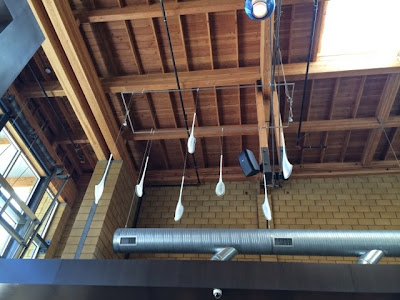 Here is a shot of the kitchen utensils on the ceiling.  Pretty unique and cool. 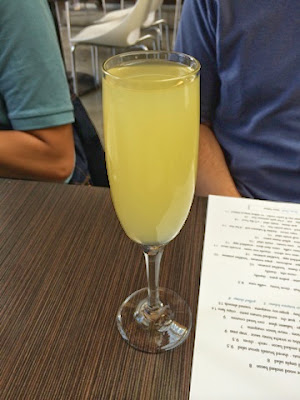 Mimosas during brunch were only $3.00!  Our table had quite a few. 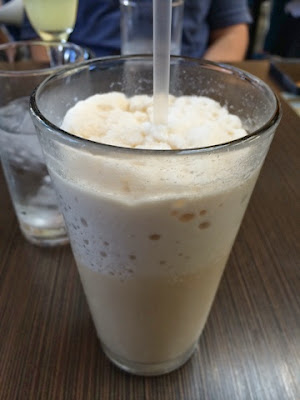 I initially ordered a simple iced coffee with cream and they accidentally made me an iced blended coffee drink ($3.75).  Our cool server told me that they can make me another one.  The blended coffee was so good! 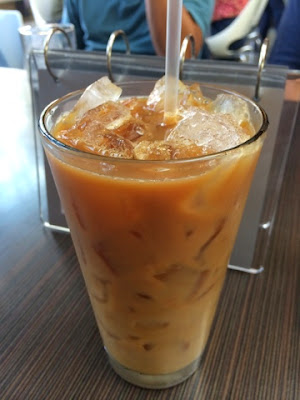 Here is my iced organic french roast coffee.  I was loaded on caffeine after finishing both coffees. They were nice to not charge me for both.  The iced coffee was bold -- that I had to put just one packet of sugar in there to lighten the boldness a little. 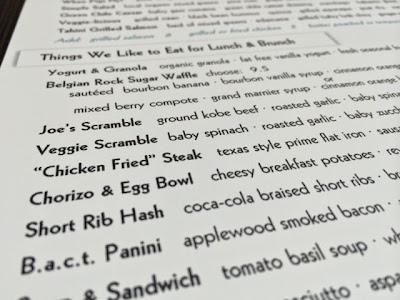 For my birthday, I always crave a steak as my special treat.  I rarely eat beef and because M does not eat beef at all, we don't have it in the fridge at home at all, only chicken and fish.  So, yeah... birthday or when I am out, I usually do order something beefy or meaty. 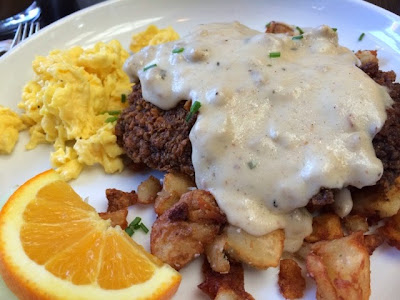 "Chicken Fried" Steak ($12.00), it was.  How could I resist a crispy, battered flat iron steak with sausage gravy, potatoes and scrambled eggs?  Oh gosh, it was heavenly.  Super flavorful and seasoned correctly.  The batter was nice and crispy and the sausage gravy added a little "oomph" to the dish. 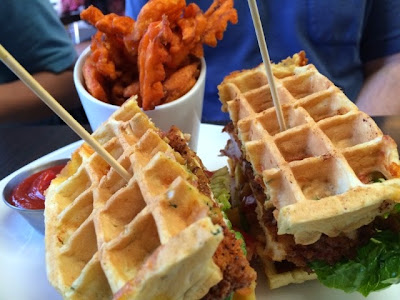 M was bummed that they didn't have their Breakfast Sammy on the menu.  He loves breakfast and wanted something breakfast-y as opposed to brunch-y.  The closest thing was the Southern Fried Belgium ($13.00), their take on chicken and waffles.  The waffle was a cheesy waffle.  The chicken was a fried chicken breast with honey mustard, lettuce and tomato. 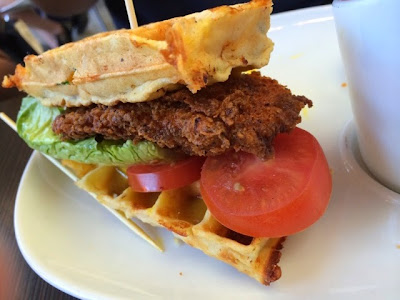 M said that it was good, but he wished that there was a sweet component to it, to get that sweet/salty effect.  I told him that he should have asked for syrup for his waffles.  He enjoyed the sweet potato crisscut fries the best. 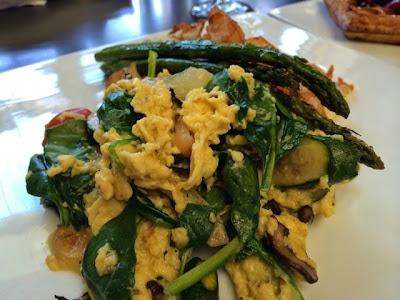 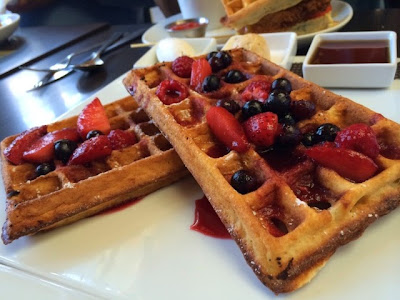 She also wanted to try the Belgium Rock Sugar Waffle ($9.50) so she ordered one so we can all try it. It came with a mixed berry compote, grand marnier syrup, cinnamon orange butter, and a chantilly cream (minus the cocoa nibs - she also gave up chocolate for Lent). 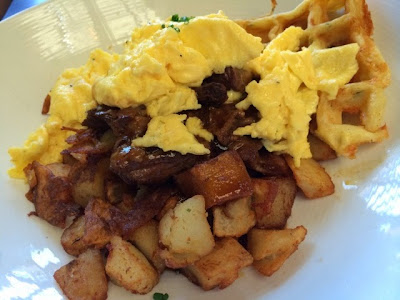 D got the Short Rib Hash ($13.00).  I had a taste of her beef.  It wasn't as tender as I thought it was going to be, but it still was tasty.  Also, am I being picky to say that this was more 'braised short ribs over potatoes'? I don't know, what's your definition of a hash?  I just expected the meat to be mixed in with the potatoes.   This dish had a half of a cheesy waffle on the side with perfectly cooked scrambled eggs on top. 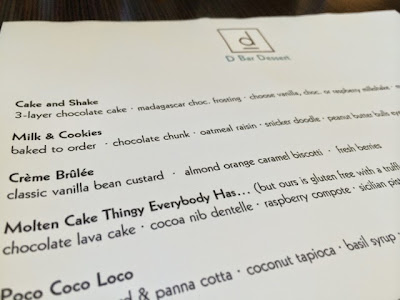 We could not leave D Bar without having dessert, of course!  We thought carefully on what two desserts we can all share.  We decided on a chocolately dish and a non-chocolately dish. 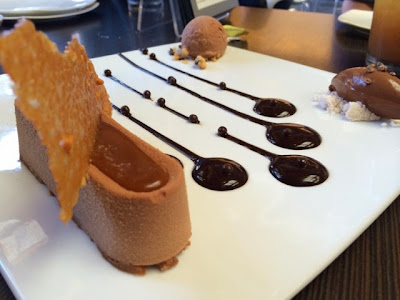 The d=mc2 (squared) ($10.00) was a definite no-brainer.  It just has all the lovely components every chocolate lover would absolutely adore:  orinoco milk chocolate mousse, salted caramel, peanut butter rice krispy crunch, peanut nib crumble, and milk chocolate ice cream.  This was rich in flavor (super sweet) and so beautifully plated! The Poco Coco Loco ($10.00) was one dessert that I would never dream of ordering!  Because S also gave up chocolate for Lent, we ordered this one for her.  Here is a picture of the front of it.... 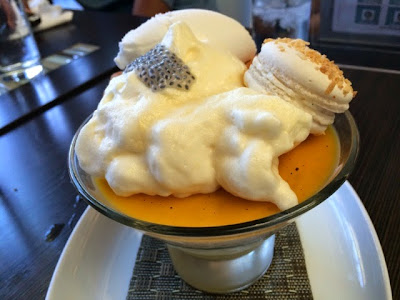 ....and the back of it.  Okay, you ready?  It consisted of passion fruit curd and panna cotta, coconut tapioca, basil syrup, french macaron, coconut ice milk, topped with passion cloud (appeared to be whipped egg whites).  Wow, right?  We could not describe the flavors as we took a bites and bites of this dish.  It was different (in a good way).  I tasted every bit of flavor described.  It was tart, not too sweet, and simply amazing.  We were in awe how someone concocted this dish and put all of these great flavors and textures together.   Our server was so excited that we ordered this one, as it is his favorite.

Overall, D Bar was such a wonderful experience.  Not only did we have the great company of my best friends, the service and food were great, as well.  I am sad that I forgot to order the Crue Fries as an appetizer, but that is one of the very reasons why we will also be back.

Happy belated bday!!! Everything you guys had looked great espcially the desserts.

I can't believe Corvette's used to be there, remember that place?

Thanks so much, CC! :) Yes, I remember! We went there a lot in college - guess we thought it was the cool place to be, LOL! I remember 'OK food' and bad service. That's why I don't even want to go to the one at Liberty Station!

Happy belated birthday! I still haven't been here but really want to. The desserts look so amazing :P

Thanks, Jinxi! Yeah, I wanted to come here for a really long time and I am glad that we were able to. Desserts were really yummy and I want to try all of them! :)

I'm really late to the mix but happy birthday! I went to D Bar on my birthday, too, last year but just for happy hour. If you like pork belly, they have a killer pork belly sandwich (only for lunch) that I looooooves. I think I want to try the chicken fried steak here sometime, yours looked super yummy! The gravy looked nice and thick with it, too.

Yum! We went here for my hubby's birthday last year. I had the picture of the chicken and waffles as my desktop background for a while... hunger-inducing! It's funny about your husband asking for sweet and totally forgetting about syrup for that dish!

Hi Mary - thanks! Pork belly, you say? Oh my... yes, please! Thanks for letting me know!

Hi Lynn - yum is right! That is so awesome that you had the pic of your chicken and waffles as your desktop! Ohhh, you had the Crue fries. Looks SO GOOD.