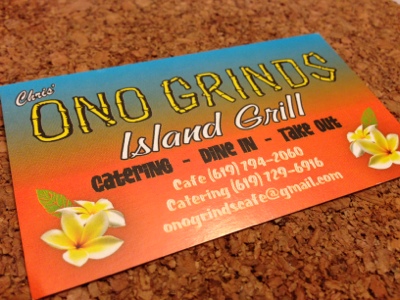 Chris' Ono Grinds Island Grill was a recommendation for catering at my work party in April. Chris, himself, was great to work with. He ensured that we had the right amount of food for the number of guests we were having and he stayed within our budget. He even threw in a salad at no charge. Everything was so "ono" and everyone enjoyed the food.  Yay!

So, I craved their food one work day and decided to call in an order. I seriously didn't want the whole entree because I was also going to order two spam musubi as an appetizer.  I ordered a small kine plate with their famous huli huli chicken with mac salad.  You gotta have mac salad at a plate lunch restaurant!

After fighting through the hellish traffic on Mission Gorge Road to get back to work, I opened the plastic bag to reveal my food.  Um, I think I ordered a kid's meal... for me.  The portion was really small... I just think that the "small kine plate" I ordered was really a kid's meal. Surprisingly, their menu now does not have the "small kine" plates anymore. 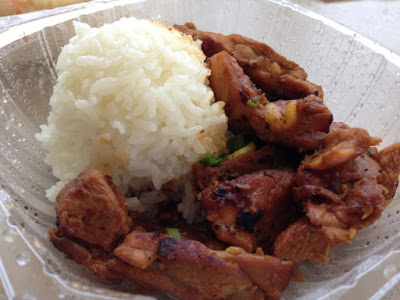 I ordered a small kine plate with huli huli chicken and mac salad ($6.49).  The size of the scoop of rice was like a golf ball and a half. The portion of the chicken was about one flattened out chicken thigh (picture one of L&L's BBQ chicken and then cut in strips). Flavors were good - but I ate it all in a few bites. But, the chicken was a bit dry by the time I got back to work.  I blame it on the traffic on Mission Gorge. 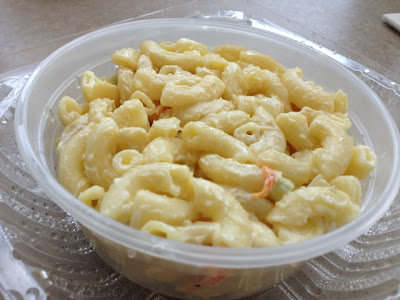 The mac salad was a nice size portion. The simple flavors reminded me of my mom's mac salad - macaroni, carrots, celery, I think there was onion, and not too much mayonnaise.  It was yummy. 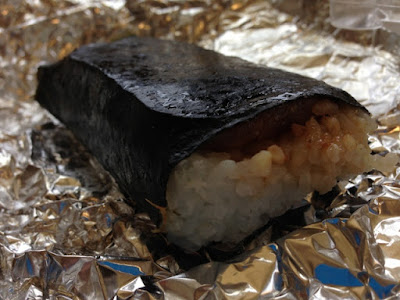 The spam musubi (2 for $4.99) were just okay.  The spam slices were cut way too thin and all I really tasted was the nori (seaweed) that was wrapped around it.  I did like the soy they put on the rice.  It gave it a nice salty touch since the salty flavor of the spam was pretty lacking.  The musubi was very flat too. 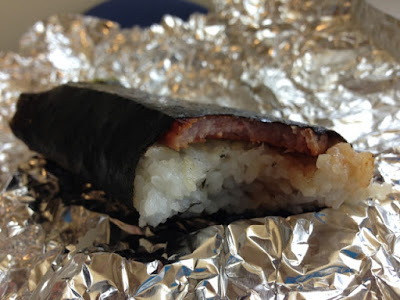 I really did enjoy having Chris' Ono Grinds during our work party.  Everything was really delicious - the huli huli chicken was moist and saucy, the kalua pork melted in my mouth, the vinaigrette in the salad was heavenly, garlicky and super flavorful, and even the tofu stir fry for a couple of vegetarians was deliciously fresh.  We also had soft Hawaiian rolls too.  Yum!

My take out order was just a tad different experience.  The small kine plate, that they don't have anymore, was overpriced at $6.49.  I paid over $14.00 (including a takeout tip) but my meal wasn't worth what I paid.

However,  I would still give them another chance. Chris is such a nice guy and they do put out really good food.  Maybe next time....