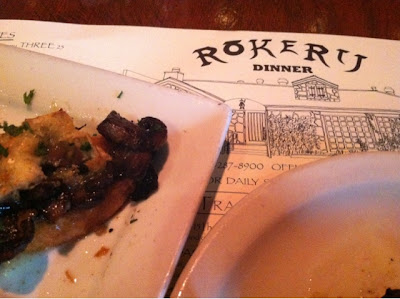 Date night in Phoenix means delicious food at a new restaurant. Phoenix is a city full of so many "non-chain" restaurants, like Rokerij.


The hubby's parents had recently went to Rokerij and loved it. We followed in their footsteps and went there for an early dinner for date night.

Rokerij is one of three restaurants in the Richardson's of New Mexico restaurant group. The 'J' is silent in the restaurant name and it's pronounced "row-ker-ree," meaning 'smokehouse'.  Looking at all three menus, they all offer the same type of New Mexican type of cuisine -- a combination of Mexican, Tex-Mex, and "Cowboy Chuckwagon". 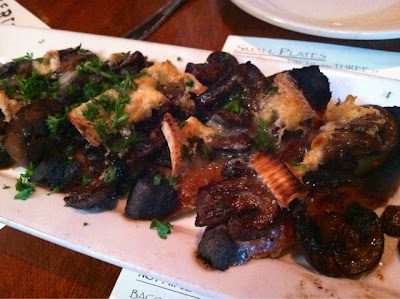 We started off with the mushroom toast ($9.00) based off the rec from the in-laws. They were crostini topped with sauteed button mushrooms and French brie cheese. The tips of the crostini were burned, which was very disappointing. Boo on the kitchen! Once we got passed the burned part, the toast was really good - savory, creamy and delicious. 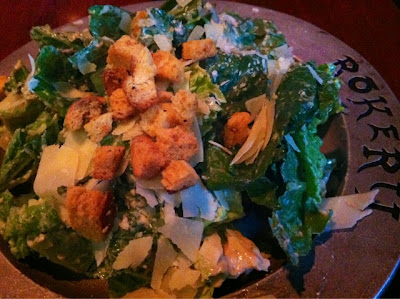 We both ordered the Caesar salad ($10.00).  It was a standard Caesar - romaine lettuce, shaved parmesan, and croutons - on a cool, chilled medieval looking plate. 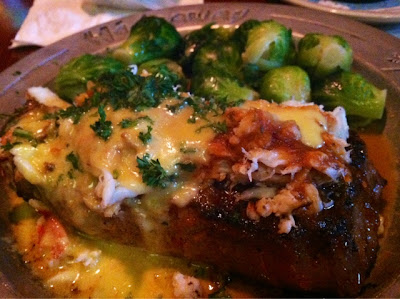 For my entree, I chose one of specials on written on the chalkboard: the Rokerij New York strip ($38.00). Are you ready for this combination? It is a grilled New York strip steak topped with dungeness crab, jalapeno hollandaise, and a spicy hot sauce.  Talk about rich and succulent!  The steak was cooked to perfection and the flavors of the sweet crab and rich hollandaise was such a treat for my tummy.  It was really delicious.  For my two side dishes, I chose the "lighter" sauteed brussel sprouts and the mashed potatoes. 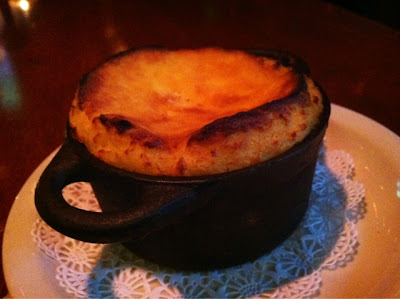 Again, the top of my mashed potatoes (in this cute cast iron skillet) was slightly burned.  And, again... once I got passed the burned portion, the mashed potatoes were okay.  Not as creamy, as I would have liked it, but it was good. 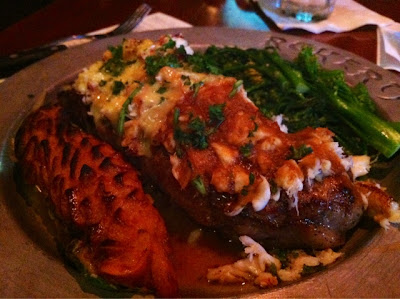 The hubby and I always joke around that we always order the same thing because we like the same flavors.  We really do; and we don't take the time to think of a plan of how we will share different items for more flavors.  We just want what we want!  Then, after we are full, we always laugh how we should have split the same item and get something else.

With that said, the hubby ordered the Rokerij New York steak too, but with their signature mashed potatoes in a green chile and sauteed broccoli rabe.

Between the mushroom toast, salad and our humongous entrees -- we definitely ordered way too much, but we left with our tummies happy AND a doggy bag.

We are unsure if we will be back to Rokerij, but we are glad to have had the experience.

Hey Faye! I know, having a toddler is hard work. We try and do date nights when we have the grandparents available! :) Haha, I know, the darn burnt mushroom toast. We were just like, "Eh, whatever, let's just eat around them." YES, the steak was amazing and seriously soooo sinful. Who would have thought of that combination, right? Thanks for the visit!