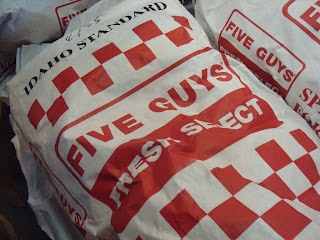 The first time I have heard of Five Guys was during an NBC news special with President Barack Obama, 'Inside the Obama White House: Brian Williams Reports'.  The special aired in June 2009.  President Obama ordered a cheeseburger with lettuce, tomato, jalapeno peppers, and mustard.  He also ordered burgers for his staff, including one for Brian Williams.

After Five Guys beat In-N-Out Burger in Zagat's Best Burger in their Fast Food Survey of 2010, I just had to see for myself. 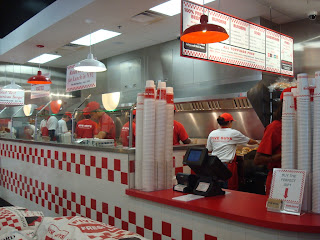 The hubby and I visited the Liberty Station location for lunch one Saturday afternoon after softball.  There were a lot of workers, hustling and bustling in the kitchen.  The restaurant is fairly big with a lot of seating inside and outside.  There were large sacks of Idahoan potatoes stacked inside and I noticed they also have complimentary peanuts in a big bucket as an appetizer for their guests.

I ordered a cheeseburger all the way, which means:  double beef patties, mayo, lettuce, pickles, tomatoes, grilled onions, grilled mushrooms, ketchup and mustard.  I wanted to try the burger in its popular form.  In my opinion, ordering 'all the way' burgers sounded like a popular choice for first timers. Please note that you can customize your burger order based on the available toppings. I also ordered small french fries to complete my lunch order. 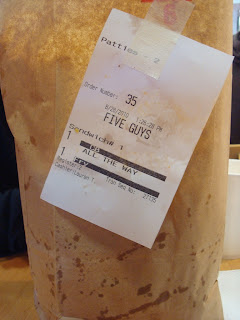 My lunch order was ready in less than five minutes.  It arrived in a little paper bag had a bit of french fry grease seeping through. 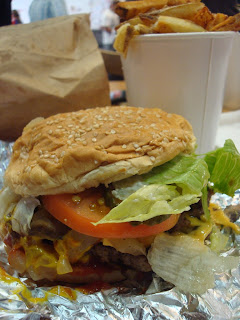 When I took the contents out of the bag, the cheeseburger was wrapped in foil and the piping hot fries were loaded into a small paper cup..

It looked like the burger was put together in thirty seconds, wrapped, and thrown into the bag with a quickness.  The presentation was not the greatest, but yes, I acknowledge that we were at a fast food restaurant so I'll let that one pass *WINK*.  The taste of the burger is what I was more curious about. 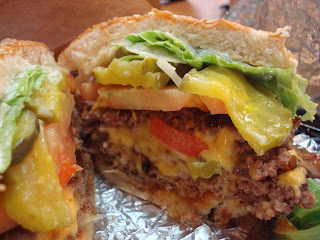 I cut the double patty burger in half and took a bite.  It had an OK flavor overall.  The presence of all the toppings definitely masked the individual flavor of the beef, even though there were two beef patties.  The burger was difficult for me to eat. It was definitely messy and gloppy where every bite I took, a bunch of toppings spilled out onto the foil. 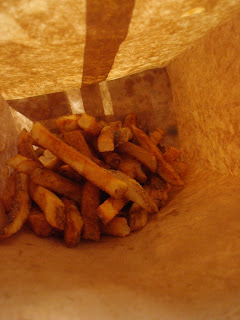 Five Guys gives you a LOT of french fries, even if you order the smallest size.  They filled the cup with fries as if they were holding the cup over the paper bag.  There was an excess of fries at the bottom of the bag.  To some, this would be a special surprise.  The fries were freshly cut with the skins on and they were hot, crispy, and really good.

Because the hubby did not eat with me, my double cheeseburger and fries were too much food for me and I ended up not finishing half of my burger and almost more than half of my fries. Overall, my Five Guys adventure was just okay and I told myself that I will one day give them another chance.  My stomach definitely wasn't in the mood for Five Guys that day.

Try it and you be the judge.... I am curious to see what you all think!

I've been, wasn't very impressed with the burger. I didn't like the bun at all and it seemed messy to me. But I really liked their fries. I prefer In-n-Out's burger but liked 5 Guys fries better. But since I discovered you can order the fries at INO lightly well done they taste better now!

I agree with you, Mary. The burger was really just "eh" to me and I do like INO's burger waaayyyy better. I would give FG another chance, but I would only order a single patty and choose my toppings wisely. It may be a while, though... we'll see if I do go back!