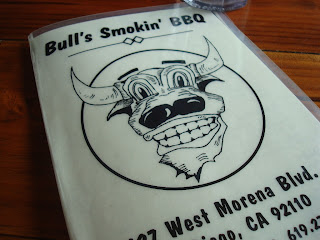 When the hubby and I drove out to Point Loma for lunch at Phil's BBQ only to find that it was closed on a holiday, we came here... to Bull's Smokin' BBQ in Linda Vista.  We were both craving really good BBQ this day so after driving into an empty Phil's parking lot on an early Sunday afternoon, I had remembered that Frankie the Bull from Bravo's 'Top Chef' had a BBQ joint in town.  Unfortunately, this restaurant is not Frankie's and according to Yelp, it had closed a couple of years ago.  Ironically, Bull's Smokin' BBQ opened in the same exact location. 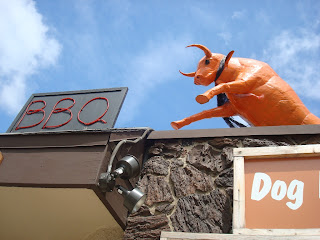 [top of the building]


Bull's Smokin' BBQ is located on West Morena near the University of San Diego.  We drove up and we were the first to arrive since there were no cars around at all.  Bull's Smokin' BBQ is a dog-friendly restaurant and the decor inside is western/cowboy themed, including the swinging doors of the 'saloon'.  The music was blasting and sure enough, no one was in the restaurant but us, the server and the cooks in the back.

The menu is full of simple BBQ fare -- smoked chicken, ribs, brisket, pulled pork, mac n' cheese, coleslaw, french fries, baked beans, cornbread etc.  The item I was most interested in was the smoked brisket..... why?  I rarely have brisket and when I do see it on a menu, I will order it in a heart beat.  I hoped it was super delicious as Rudy's brisket in San Antonio, Texas.  The brisket there melted in my mouth. 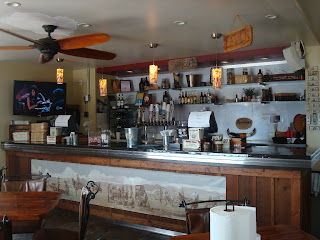 [order from the counter]

I will be the first to admit that the hubby and I were not creative with our lunch orders.  In fact, we never talked about a 'plan' and we basically selected what we wanted to eat.  Be aware that the pictures below look like the same sandwich, but in fact... were different.  All right, just slightly different. 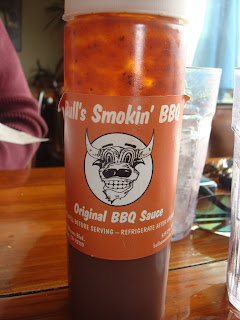 I ordered the smoked brisket sandwich with Bull's Fries.  The smoked brisket was carved in slices and served on an authentic Amoroso roll (yummy).  The meat was moist and tender at first.  But as soon as I got to the second half of my sandwich, the brisket toughened just a tad and it was not as enjoyable, even with Bull's Original BBQ sauce on it. It did not melt in my mouth like the brisket at Rudy's.  *sad face* 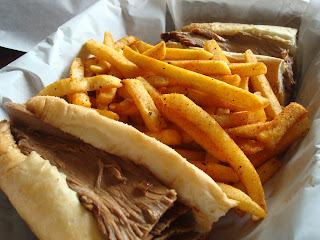 The bread, though, was delicious, as Amoroso rolls are the ones used for cheesesteak sandwiches in Philadelphia. Yum! 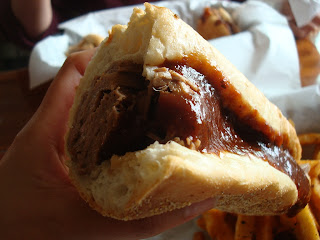 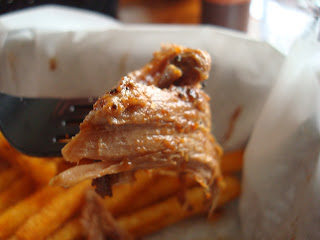 The hubby ordered the Bull's Duo Sandwich (smoked pulled pork and smoked brisket) with the Bull's Fries.  I guess we were both craving the same thing.  What we should have done is shared the sandwich and gotten a couple more sides, like coleslaw with almonds, corn bread, baked beans... and oooh, mac n' cheese! 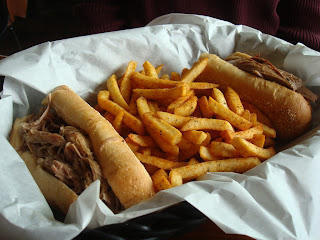 
Truthfully, the pulled pork tasted similar to the smoked brisket.  I mean, it was good... but nothing stood out from it to tell me, "Oh, wow... that's a great sampling of pulled pork." 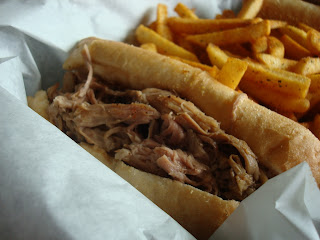 All in all.... Bull's Smokin' BBQ has great customer service, good sauce, and great bread for sandwiches.  Yeah, I did not mention the meat on purpose.  Like I mentioned before, I wished that we talked about our 'eating plan' and ordered different flavors to make this entry a little more exciting.  *Ho hum*

One funny thing is that on the condiment counter where the server picks up the food from the kitchen, there was a bottle of Phil's BBQ sauce sitting there.  Weird, huh?

Phil's BBQ still remains my favorite BBQ joint in San Diego.  Although, I have not tried that Barbecue House in Ocean Beach yet.....hmmmm.....
Posted by Janice D. at 12:07 AM