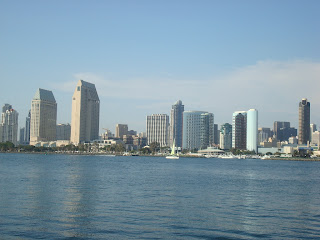 We are very lucky to be living in San Diego, California, especially with this great view of downtown from the Coronado Ferry Landing.

I took a week off of work during the summer and called my short stay-cation break "The Summer of Janice" as a homage to one of my favorite comedy TV shows, Seinfeld ("The Summer of George").  Mike and I decided to hang out at the Ferry Landing to relax by the San Diego Bay.  We decided to stop by Lil' Piggy's BBQ for lunch. 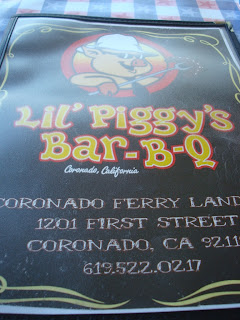 Our good friends told us about Lil' Piggy's BBQ when the restaurant took over the Thai restaurant at the Landing.  She said that it was "just okay", but I was curious to see how different restaurants do BBQ besides my favorite BBQ joint in town, Phil's BBQ. I have been craving BBQ brisket and I was happy that it was on the menu. 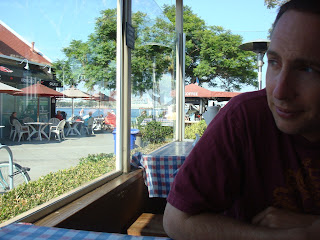 We walked in the restaurant and saw cash registers up front.  I assumed that we had to order from the register and then take a seat (similar to Phil's).  As we walked up the counter, we heard a voice from a waitress asking us, "Two for lunch?"   We follow our server to a picnic table that faces Village Pizzeria.  It turns out that the registers were only for 'to-go' orders.

The fact that we were going to be eating at a sit down restaurant, I wasn't thrilled at the idea.  I didn't expect this casual little place to be a 'sit down' especially when I look out the window and I see a few vacant tables and the nice, green grass that we can be sitting on.  I ultimately decide that we were not going to leave our table and order take out. I hoped that the food be worth staying in and paying the 20% gratuity. 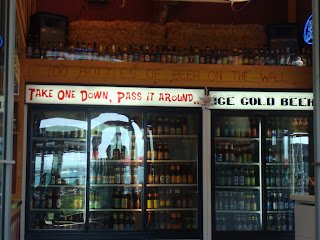 I browse the menu once over again (studied it earlier) and decide on the Beef Brisket Piggy Plate - $12.99 for the Lil' Portion.  The plate comes with your choice of sliced beef brisket or chopped brisket, two sides, and sliced white bread. The sides that you can choose from are: curly fries, potato salad, mac n' cheese, corn fritters, onion rings, baked beans, garden salad and corn on a cob (for an extra charge). 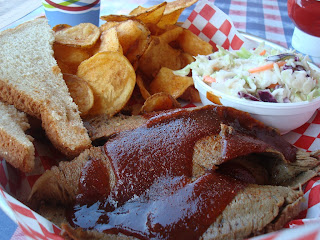 My piggy plate came with sliced BBQ brisket topped with BBQ sauce, homemade potato chips, and cole slaw.  The potato chips are not an official 'side', but I noticed that they offered these as an appetizer. You know how much I love potato chips... I thought it didn't hurt to ask. Ask and you shall receive. I received my potato chips with a bleu cheese sauce. 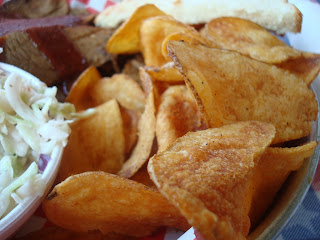 The potato chips were good, but I could tell that they were 'pre-cooked' and have been sitting out for a little bit.  It had a crunch, but not the same crunch I would usually receive with fresh 'out of the fryer' potato chips.  Still, chips are chips and I still enjoyed eating them.... even though they weren't that fresh. 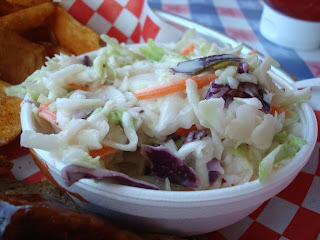 I find it funny that I took a close up picture of all the sides, but not the main course... the BBQ brisket.  I really enjoyed eating the brisket. The meat was soft, warm, and very juicy.  The sauce is quite different from Phil's - a bit sweet, smoky and thick.  I love thick and rich BBQ sauce.  At the table, they also have a bottle of their spicy BBQ sauce, which I tried.  I liked their regular sauce better since I'm not into spicy foods.

All in all, the food was good, but the price of $12.99 for my brisket plate (plus gratuity) was a bit too much.  I am happy I got to experience another BBQ joint other than Phil's BBQ, but I'll probably leave the place up to the tourists to enjoy.
Posted by Janice D. at 4:51 PM

If you haven't tried it, you must delight in a meal at Joey's Smokin' B-B-Q (I can only speak for the Carmel Valley location). It's on my food faves list. By the way, went to New York and couldn't find a burger better than you-know-which.

Mmmm, more BBQ. Thanks for the rec about Joey's. I'll definitely have to check it out when we're up in the North County! Speaking of burgers, the quest ratings will be turned into me by the end of Feb. Stay tuned for the results! :)