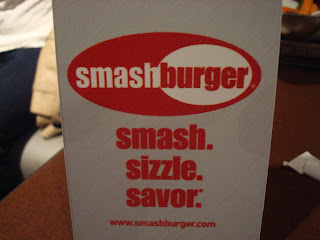 When the opening of Smashburger in La Jolla resulted in a whole bunch of Twitter peeps to tweet about it, the hype prompted me to try and find the best burger in San Diego -- therefore, the existence of the Burger Quest 2010.

Smashburger is clearly on my burger quest list, so when Junvi, DiegoOnaDime.com, invited me to be her date at the Del Mar VIP Opening of Smashburger Del Mar, it was the perfect opportunity to rate their classic Smashburger and french fries.  What makes their hamburgers a true "Smashburger", according to their website, "Fresh, never frozen 100% Angus Beef [is] smashed, seared and seasoned on the grill."  Nice. 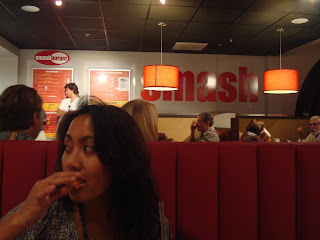 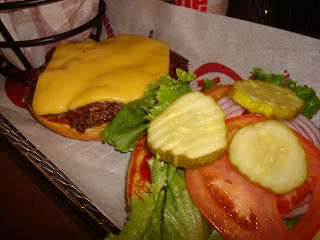 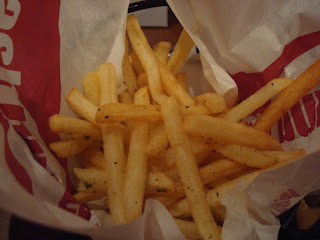 ....and their smashfries, which are their fries tossed in olive oil, rosemary, and garlic.  They are served in cute little cones with their signature logo on parchment/wax paper.  Because I rated both the burger and fries for my quest, I am refraining from reviewing it. You can be the judge by visiting one of three locations here in San Diego.  *wink* 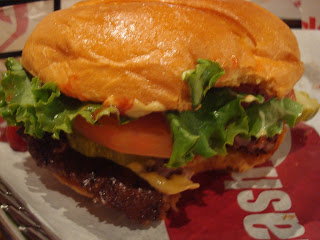 PROPS to the Smashburger staff for letting Junvi know that they have a "no meat"option on the menu besides eating just the smashsides (which what she was going to do).  They serve a black bean burger, which isn't on the San Diego menu online, but they do have one as an option.  Junvi ordered the burger along with a side of veggie frites.  Unfortunately, I didn't get a picture of the black bean burger.  I tried a piece of her "meat".  It tasted how I thought it would taste -- like black beans, which is a good thing because other restaurants try and 'mask' what the vegetarian item is supposed to be, like to try and recreate the taste of red meat using vegetables, whole grains, etc.  I enjoyed the flavor. 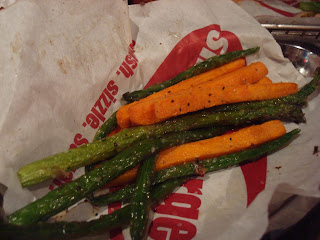 The veggie frites were not what we expected.  Even though the menu description stated that they are 'flash-fried', I expected them to be lightly battered and then fried -- similar to tempura vegetables.  They looked a little sad sitting on the silver dish when they were served to us.  The vegetables were not crisp and "fresh looking" anymore.  The asparagus was limp and tasted just okay.  I would prefer the vegetables to be steamed to maintain its crispiness and "right from the market" look. 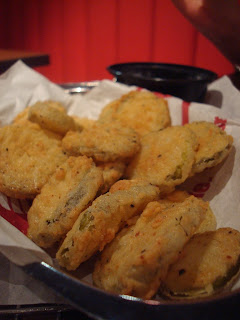 The final thing I wanted to try were the fried pickles.  I could not stop eating these.  They were addicting and like potato chips where I couldn't eat just one.  The pickles were fried to a perfect crisp.  They overseasoned the pickles once they came out of fryer, but still... I kept taking one, dipped it into the cool ranch dressing and popped it into my mouth.  Fried pickle after fried pickle.  I was full from the Smashburger and Smashfries but I told myself that I was just going to have one more.  And one more.  One last one.  OK, this one is it.

We called it a night after chatting it up with the lovely ladies of Elle Comm, including the CEO, Ms. Danielle, and Relationship Coordinator, Dara. 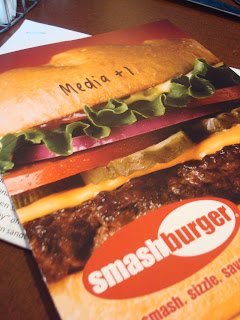 Dara from Elle Communications sent me an invitation to the Smashburger in Mission Valley to try their newest menu items this month: 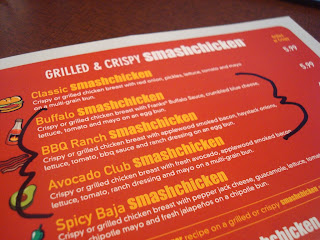 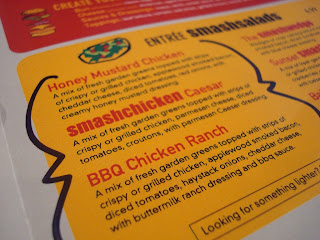 [they highlighted the entrees for us]

I invited my co-worker, Brian, to experience the new Smashchicken sandwiches with me.  We headed over to the Hazard Center on a Tuesday evening after work.

We arrived promptly at 6:00 PM when the event started and met Dara right outside of the restaurant.  After she greeted us, Dara told us to order one of the new menu items, a side, and a drink at the counter.  We also had to show the Smashburger staff our "media" menu upon ordering.

And so, Brian and I came up with our "eating plan" while waiting in line:
Our plan was that we split each chicken salad and share the smashsides. 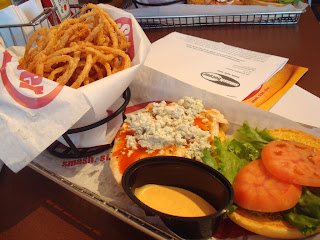 Our orders arrived promptly and very quick.  We received a nice portion of the haystack onions (which Brian apparently loved saying) and the stack was accompanied by a side of their onion ring dipping sauce. 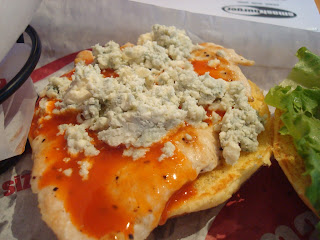 The grilled chicken breast on the Buffalo smashchicken was slathered by a thin layer of Frank's delicious buffalo sauce and TONS of crumbly bleu cheese.  The chicken was cooked perfectly.... it was juicy.  The only thing is that the bleu cheese overpowered all the flavors of the sandwich that I could only eat a couple of bites. 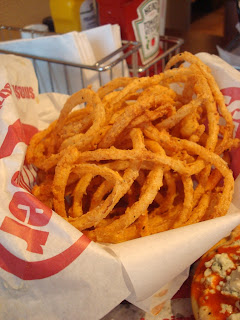 The haystack onions were very delicious.  Crispy, straight out from the fryer, with the right hint of salt.... nothing else to say about these babies.  They were really good. 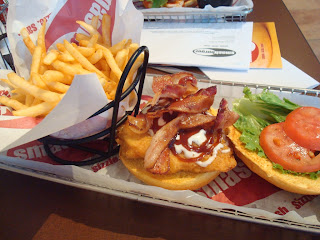 The BBQ Ranch smashchicken was DELICIOUS.  The combination of the texture of the crispy chicken, saltiness of the bacon, tanginess of the bbq sauce and coolness of the ranch sauce, fresh tomato, and lettuce was perfect.  I liked it better because of the fried chicken breast.  Although I do eat grilled boneless chicken breast at home often, I prefer the fried stuff outside of our household. *smirk* 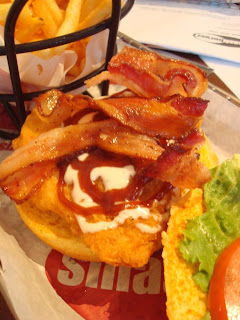 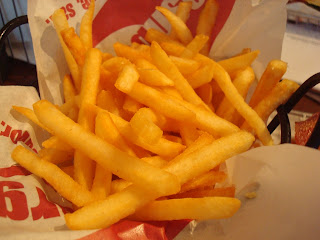 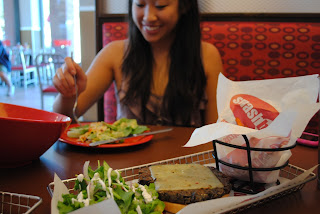 Dara invited me to lunch at the Smashburger Mission Valley to try out a few of menu items that I did not get to sample at my initial two visits.  We met for lunch on a lovely weekday afternoon.  I also got to try out our new camera for food shots. 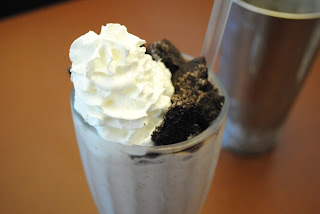 Dara convinced me to try the Oreo milkshake as a special treat (and our appetizer since it came out before the food did).  It was heavenly delicious.  It was cold, thick and creamy and full of the Oreo flavor that I enjoy so much. THIS was one of the main reasons we got together -- the honey mustard chicken smashsalad.  I can eat this all day.  Crispy chicken (you can get it with grilled chicken too), field greens, red onion, cheddar cheese, diced tomatoes, applewood smoked bacon, and their creamy honey mustard dressing.  It was very filling and a great "lunch" salad for those on a go.  This size was the full size and it was more than enough for sharing (since we had more food coming!). 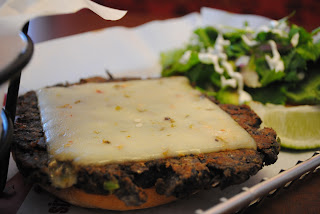 We both order the black bean burger with melted pepper jack cheese -- and San Diego style, per the recommendation of Dara.  A San Diego style sandwich comes with fresh cilantro & onions, avocado, lettuce, and a drizzle of sour cream & chipotle mayo.  The burger was really good.  As I mentioned before [above at the Del Mar opening], I love the taste of black beans and what I was eating was a simple black bean patty.  Combined with the flavors of Mexico, it was absolutely divine.  I'd order this burger again in a heartbeat -- yes, coming from some who adores meat.  Note:  Dara pointed out to me that this burger is a "no meat" option and not a vegetarian entree since they grilled them on the same flat top as the burgers. 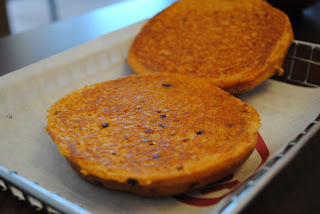 The owner of all the Smashburger locations in San Diego sat and joined us for a while.  He suggested that we try their spicy chipotle roll as a bun alternative for their smashburgers and smashchicken sandwiches.  I took a bite and although it was very flavorful with spices, it was a bit too spicy for me. 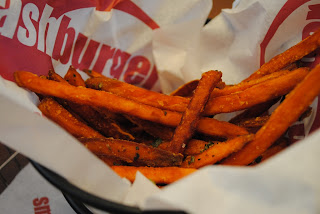 My reviews of Smashburger were definitely overdue.  I personally would like to thank Elle Communications, especially Ms. Dara, for hosting such wonderful restaurant events.  I look forward to more!
Posted by Janice D. at 5:55 PM

I knew you'd comment about that - your other love, fried pickles!