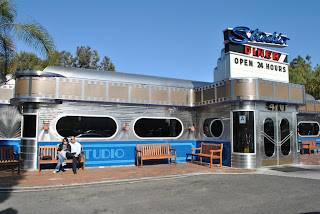 
Alright, I am going to admit a few things about the Studio Diner.  I admit that I was aware that the Studio Diner existed in Kearny Mesa and never visited when I lived in Serra Mesa after graduating college.  I admit that my work colleagues and I went to breakfast here a few years ago and my dish was just okay.  I also admit that seeing the diner on "Diners, Drive-Ins, and Dives" (DDD) on the Food Network prompted me to go back because I enjoy watching Guy Fieri.  Thanks to that episode, I probably wouldn't have thought of coming back! 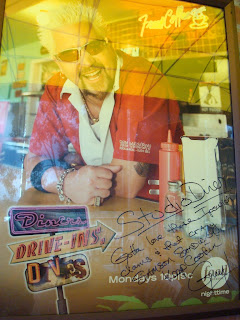 Money saving tip:  They are a participant of Restaurant.com, so you can't beat getting a $25 gift certificate for only $2 when it's 80% off.... hooray for saving money! 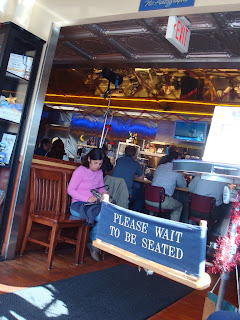 Studio Diner is located right next door to the Stu Segall Productions which produced television shows like 'Silk Stalkings', 'Renegade', and 'Veronica Mars'.  According to the 'DDD' episode, Segall, a Bostonian, decided to have the diner built next to the studio because he missed diners.  The New England Ipswich clams are shipped directly to San Diego from Cape Ann, Massachusetts!  Awesome!  Be sure to check out the menu section called "East Coast Specials" for Stu's New England menu like lobster rolls and creamy clam "chowda".

The decor inside is "movie production"-related with the director's chair at the host stand, actual film reels to hold the condiments at the table, production lights set around the restaurant, and the dining plates have "film" around the edges. 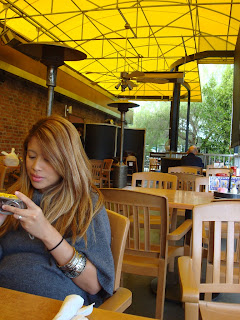 With a $25 Restaurant.com gift certificate in hand, my sister's family and I decided to have lunch at Studio Diner last December 2009.

The thing is with me is that if I'm craving something... I satisfy my craving with no hesitation.  I still read every item on the menu, but I usually always go back to my craving.  This day, I was craving a pastrami reuben. Oh, how I love the tang of the crunchy sauerkraut, paired with the cured meat.  Dee-lish! 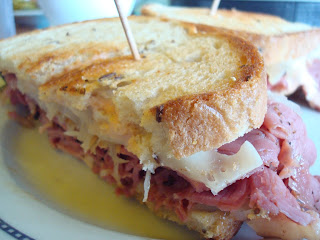 Yep, I ordered it.  I couldn't resist hot pastrami on grilled rye, swiss cheese, and thousand island dressing.  I swear, I am a complete sucker for these.  Everyone knows that I'm also a sucker for cole slaw too, so instead of french fries, I ordered a cup of the slaw with my sandwich.  The sandwich was good, but just okay.  The pastrami had quite a bit of fat in it.  I wished that the meat was trimmed a tad bit more.  The cheese wasn't even melted.  However, all in all, the flavors were good and the sauerkraut tasted fresh.  I enjoyed the crunch of the grilled rye bread. 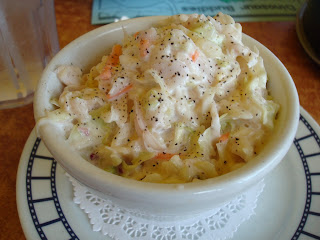 This is my cole slaw after I seasoned it with pepper, what I usually do with my slaw.  Although the slaw had good flavor, there was too much mayonnaise.  I didn't mind the overdressed slaw that much, but I think that the regular customer would have not liked it as much as I did. 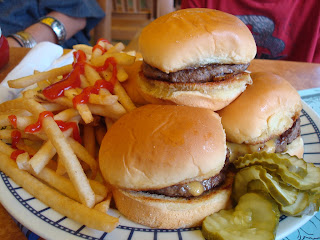 My nephew, J, ordered the Crew Sliders - which are four cute, mini cheeseburgers with grilled onions, pickle slices, and a large side of french fries.  He was quick to squeeze Heinz ketchup on his fries as soon as the plate was served in front of him.

The burger was very good and the grilled onions were a nice addition to the plain cheeseburger.  He even gave me a slider to taste and to review.  He wanted to taste my sandwich too.  I asked him if he's had pastrami and sauerkraut before and he said "no."  There was no hesitation, though... he ate the piece I cut for him and although he wasn't that impressed, I was proud of him for trying. 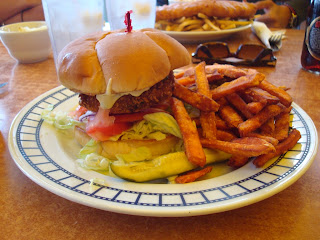 Sheila ordered the blue crab cake sandwich with sweet potato fries.  Yum!  I didn't get to have a piece of her sandwich (didn't blame her - she was six months pregnant *smirk*).  She said that it was really delicious and she enjoyed her crispy sweet potato fries. 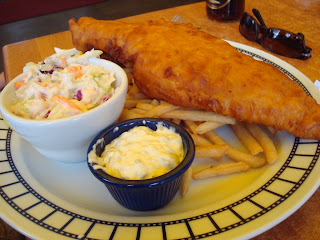 My sister's husband, Ron, ordered the fish n' chips ....huge ol' piece of Icelandic Haddock, french fries, cole slaw, and tartar sauce.  The fish was tasty and flaky.  This dish is something I would definitely try the next time I visit.  I love, love, love.... fried goodness!


[second experience]
... all pictures below are taken by Pam/Louis ... 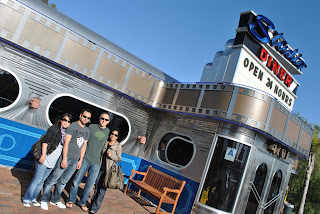 Louis' brother, JP, was in town from London, England, for the baby shower of his god son/nephew.  We met Pam, Louis, and JP at the Studio Diner one summer evening after work for an early casual dinner. JP has never been to an 'American' diner before so it was nice to introduce him to this particular "west coast" diner.  While browsing the menu, he inquired about items like malts, 50/50 shake (with OJ and vanilla ice cream), and what exactly is 'chicken fried steak'. 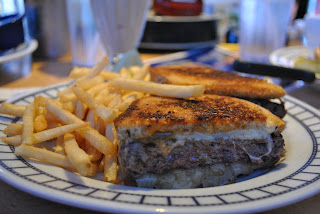 Pam ordered the patty melt - grilled rye, juicy burger, melted swiss cheese, and grilled onions with a side of french fries.  The fries appeared to be of the frozen shoestring kind by the looks of it but they still were a plate of fried potatoes!  The patty melt was yummy. 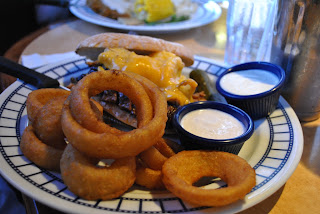 Louis ordered one of the "Blue Slate Specials" of the week -- it was a sirloin steak sandwich on a crusty roll with melted cheddar cheese and a side of onion rings.  Part of me thought of ordering this special, but I really wanted to try the Samson steak sandwich!  Louis also ordered the root beer milkshake for him and Pam to share. It was SO darn good.  If you love root beer, you have to try this! 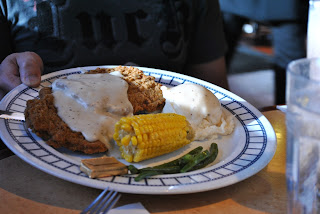 I guess our description of the chicken fried steak was good enough for JP because he ended up ordering it as his dish.  It was served with thick, country gravy, creamy mashed potatoes, and vegetables on the side.  He also ordered a chocolate milk shake along with his meal. 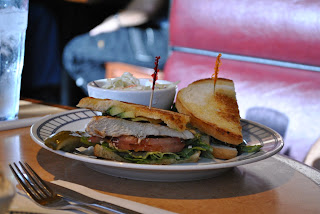 Mike ordered the Boob Sandwich (great name for a sandwich, BTW) -- grilled sourdough, grilled chicken breast, avocado, lettuce and tomato with no bacon or Jack cheese.  He ordered cole slaw for his side.  The chicken breast was cooked very nice, as it was juicy and not tough at all. 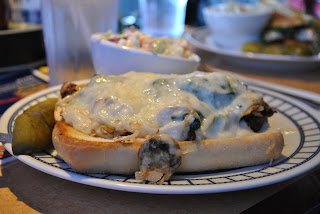 The Samson Steak Sandwich .... my order.  Segall's father's name is Sam, and of course, Stu is his son.  Therefore, the name of this great sandwich was created.  This is a take on an "Asian" inspired cheese steak sandwich.  The thinly sliced prime rib is marinated in soy, pineapple juice, garlic, sugar, black pepper and sesame oil before grilling it on the flat top to a perfect medium rare.  Spinach, mushrooms, onions, and bean sprouts are sauteed and layered on top of the steak on a toasted roll.  Finally, the sandwich is covered in mozzarella cheese and heated in the broiler until the cheese melts.  You can watch the DDD clip of the history of Studio Diner and how Chef John makes the sandwich here.

This steak sandwich was SO delicious.  I couldn't stop eating it.  The steak was tender and I could definitely taste the marinade.  I love sauteed bean sprouts and how crunchy still were (guess you all probably noticed that I like crunchy food items).  Everything about the sandwich was divine.

Alright, folks... this sandwich alone will keep me going back to the Studio Diner.

Thanks, Guy Fieri and the Food Network!
Posted by Janice D. at 1:51 PM

Interesting review.. not I will look at the diner differently.. haha, I see the Diner all the time but never thought of trying it anytime soon.. well that has changed... food looks delicioso! Thanks for the feature Janice.. keep them coming!

Next time, try the Sloppy Bob! It's the best!

Hi Malou! Thanks for the visit! I know, the diner is kinda just "there" and don't really think about it too much! That steak sandwich is pretty good though! We need to plan our next "tweat up"!

Heyyyy Lan! Thanks for leaving a comment!!! Will definitely try the Sloppy Bob. My next blog post is an ode to you... since you are a Philly girl! "You'll see..."

Hi Dennis! LOL, I know.. sometimes he can be over the top! Thanks for the visit. I love your food blog!