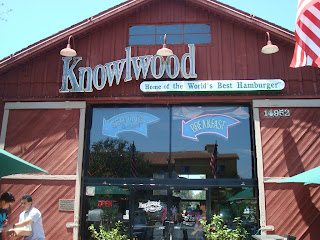 I met my friend, Rod, for the first time at the 2001 San Diego Asian Film Festival (SDAFF), when I assisted with the marketing and promotion when the festival was only in its 2nd year.  Rod's movie was the first Filipino-American film to be accepted into the Sundance Film Festival and it screened on the opening night of SDAFF.  Since we've met, Rod and I have been good friends ever since.  It has been over seven years since we last saw each other, so we scheduled to meet "in the middle" for lunch one Sunday afternoon in July.

Knowlwood Restaurant in Old Town Irvine was a restaurant suggestion from one of my students who is familiar with the area.  I wanted us to meet a restaurant off of the 5 freeway that has the following criteria: something different, delicious food, is a mom n' pop, and is not a popular chain restaurant. 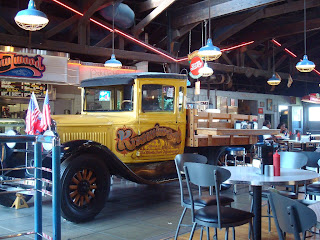 Knowlwood has five restaurants in the Orange County area.  The restaurant has family history that dates back over 50 years ago.  Their first restaurant was opened in 1957 by Roy and Faye Knowlton and Gene Wood in, what was then called, Orangewood Ranch.  That area today is called Anaheim Hills.  They specialize in serving delicious food while offering great customer service.  They trademarked the phrase "World's Best Hamburger", because the locals referred their burger as the "World's Best." 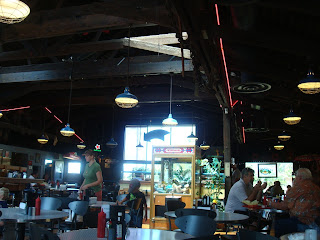 For a Sunday afternoon, it was not busy at all.  I figured that we missed the Sunday breakfast crowd and simply walked straight to the counter after deciding what to order.  The guests eating at the restaurant varied from families, teenagers, college students, and senior citizens.  The decor had an old "country feel" to it, as there is an old truck right in the front of the restaurant once we walked in.  Guests order from the counter and then seat themselves.

Rod and I placed our order and immediately caught up on the most recent happenings of our lives.  After patiently waiting for about 15 minutes, our order number was called.  Hooray! 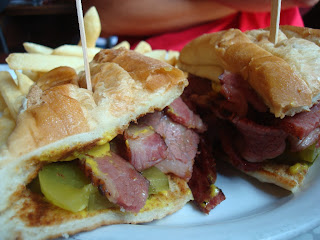 Rod ordered the pastrami sandwich with a side of french fries.  The sandwich is served on a baguette with sliced pickles and yellow mustard.  For the most part, the flavors were good, but the pastrami was a bit fatty.  The bread was soft and warm -- and I imagined it to be crunchy and toasted.  The fries were the standard, thick cut french fries that were fried just enough to be cooked -- not so much cooking them to crispy golden brown. 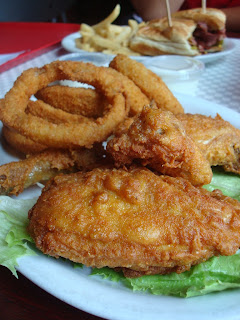 Remember my Vegas post where I said that if a restaurant is "bragging" about what they do best (i.e. World's Best Hamburger) that I should absolutely try it out?  Well, because of my Burger Quest, lately I have been "burger'ed" out.  I was craving crispy, fresh fried chicken!  I owe it to Jayne's Gastropub for their fried chicken special.  Also, I read a few reviews on Yelp and one person said that they have the best fried chicken.  As soon as I read that, I was sold on ordering it.

I guess the "World's Best Hamburger" will have to wait.

I took a single picture of my chicken platter, which I ordered with onion rings instead of fries for a dollar more.  The succulent pieces of chicken arrived with an assortment of a breast, wing and drummette, and a drumstick.  When I ordered it, the cashier said that it would take a while since they fry the chicken fresh.  YES, please!  They get a plus from me for that!

The chicken was absolutely scrumptious.  I enjoyed every bite.  The chicken meat was juicy, tender, and very flavorful.  My guess is that the chicken pieces were brined.  The skin was fried to a perfect crisp and there were no signs of any overcooked/burned pieces.  It was the true sign of perfectly fried chicken.

After lunch (and after Rod ate all my onion rings), we drove over to the Irvine Spectrum for frozen yogurt and spent the rest of our lunch date talking about our families and our personal lives.  After years of not seeing each other, it was like yesterday that we were hanging out at the festival.  Good times -- that's what good friendship is all about... AW!

Your lunch date with Rod sounds like fun. Something I haven't done in awhile. Hubs works in Irvine, remember? So there's a slight chance we might try Knowlwood Restaurant sometime. Thanks for tagging me along!
Malou

Hey Malou! It was great catching up with an old friend and not to mention, pretty tasty fried chicken. Let's have another "twEAT up" soon!

Was this really five years ago?? Hi, Jan! Nice to see you kept up the foodie blog. Hope all is well with you and your family. Miss ya. Text me some time. =) *hugs*

Wow, five years ago! Time flew by. That fried chicken was good, lol. Hi, Rod! It's always great to hear from you. I'll text you soon! Miss you and hope all is well with your family, too! Take care! :)