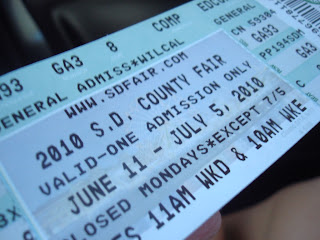 We look forward to the San Diego County Fair every year because of the fair food. Truthfully, I am not the type to indulge on items like the Krispy Kreme chicken sandwich, deep fried butter (yuck), or any deep fried whatnots that Charlie's Chicken offers annually. However, I did tell myself that I wanted to try one "deep fried somewhat reasonable thing" at Charlie's Chicken. I mean they are the king of the fried fair foods... you know? 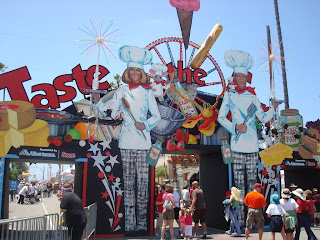 We decided to go on a "Taste of the Fair" Tuesday where samples from a majority of the food booths are $2.00. I thought that it would be good way to have multiple tastes without getting full fast from the large portions at regular price. Browsing through the all the food vendors, some of the samples were not exciting, nor worth it -- french fries, a 2 oz. portion of chopped BBQ pork (in a teeny tiny cup! Think Rubio's salsa cups), 1/2 churro, 1/2 hot dog, etc. I think that the fair would generate more interest in these food booths if they offered a new flavor sample for $2.00 as opposed to the generic 1/2 corn dog. Not exciting!

OK, so reading the new menu items on the Fair website, I noticed one that looked mighty interesting to me: Hash Brown Fry Dog (hot dog dipped in batter, then in hash browns or sweet potato and then deep fried) ...wha??? 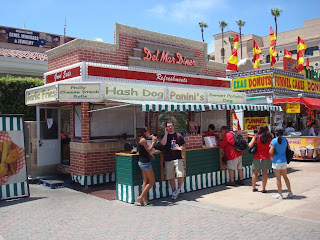 [waiting patiently to try a hash dog]
The Del Mar Diner is located in the "middle" of the park near the entrance to the amusement rides. It is near that little ice cream vendor that is shaped like a soft serve cone. The Del Mar Diner is the official home of the Hash Dog. I was pleasantly surprised to find out that the $2.00 taste was a small portion of the hash dog. I really only wanted a taste and it was a perfect portion. The full sized dog is about 3 times bigger than the sample and is priced at $5.75 + tax. 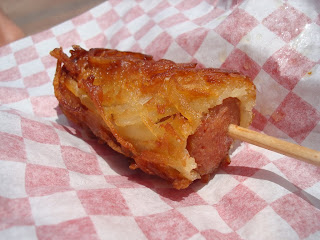 The hash browns surrounded the dog were crispy and the hot dog was surprisingly juicy and pretty tasty. One down... more to go! I was even hungrier now. 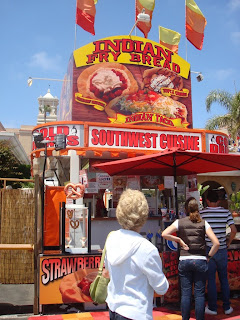 Linda had a snack before we went inside the fair so she was craving indian fry bread. The $2.00 taste had two flavors offered... cinnamon/sugar and powdered sugar. Because I didn't have lunch yet, I only had a taste of hers. 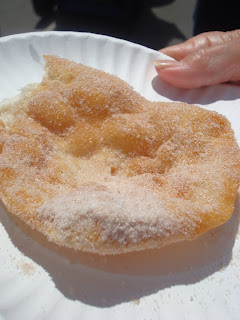 It was a nice sized portion for the price of $2.00. The fry bread was made to order and served immediately right off the fryer. See that little piece that was broken off... yeah, that was me wanting to taste it and then I realized I had forgotten to take a picture of it. Ha! 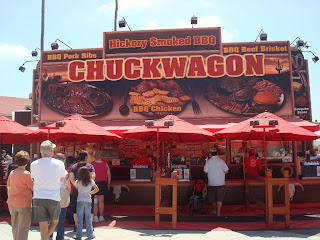 I was still craving something savory and I knew it wouldn't be a sampling. I wanted something hearty and delicious. The smells of the BBQ'd meat as we walked through the fair were luring me to the Chuckwagon. I wanted BBQ and I have been craving BBQ beef brisket for a while now. The Chuckwagon line had a good number of hungry fair goers, but that did not stop me from getting a BBQ beef brisket sandwich ($7.75 + tax). I could have gotten the complete meal for an extra $3-4, but I wanted to save my stomach for more tastes. 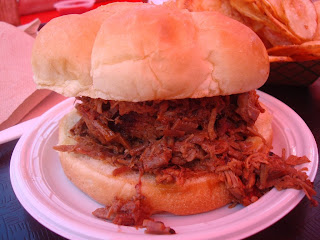 The sandwich was served with a warm, slightly toasted soft bun and the chopped brisket inside was tossed in a little bit of sauce. The Chuckwagon offers their signature BBQ sauce at the condiment station in this huge container that usually dispenses hot coffee or hot water. I poured a little bit in a little 2 oz. plastic cup. 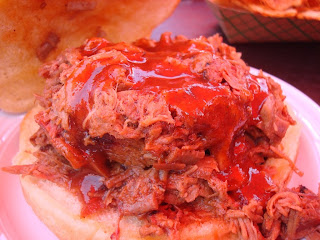 Yum yum yum! It was so darn good! The guys at the wagon gave my sandwich a hefty portion of chopped BBQ brisket. The meat was tender and very flavorful. The sauce was tangy, warm, and had a slight sweetness to it. 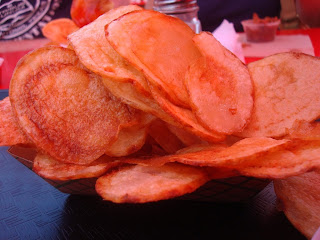 Next, THIS is what I love. My favorite snack in the entire world is potato chips. The Tasty Chips booth offers THIS sized portion for $2.00. It was a PERFECT compliment to my BBQ brisket sandwich. The chips were crispy and sprinkled with a little bit of salt. While I was waiting in line at the Chuckwagon, my hubby went over to get these for me. He poured a little Heinz ketchup in a mini paper cup. I loved the two flavors together, especially my Heinz ketchup! Yeah, I ate all of them. Pretty much all by myself. 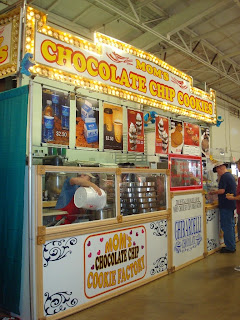 Mom's Chocolate Chip Cookie Factory is all lit up with lights and easy to locate. It is located inside one of the exhibit halls where there are endless rows of craft faire-type vendors and are housed generally in the same corner. *hint: Exhibit hall near the Chuckwagon* Their chocolate chips cookies are so chewy, warm, and sweet. These cookies have a slight crunch on the outside and a yummy chewy inside. 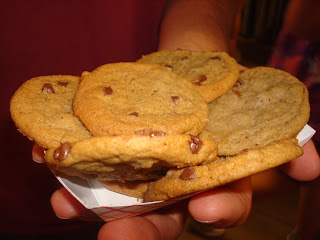 The smallest portion of their heavenly cookies comes with eight cookies ($4.75 + tax). I ate six of them. And I got full. *sad face* I wanted MORE fair flavors, but couldn't let them go to waste.

We browsed through the shopping area, visited the winning flowers, and checked out some livestock. I was glad that I was walking off my full stomach. 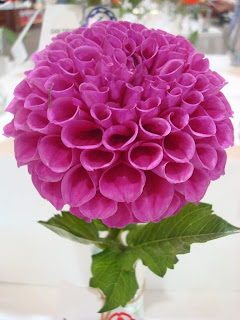 [pretty flower that won 2nd place - seemed like a 1st place winner to me!] 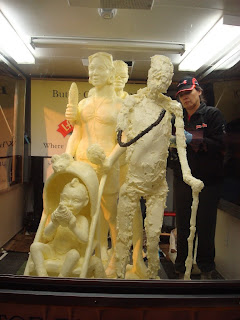 After resting in the smaller stadium to watch the young equestrians ride, I was ready for one last taste. Remember I mentioned that I wanted to try something fried from Charlie's Chicken?? 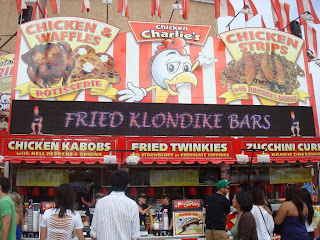 As I looked at the two ginormous booths that Charlie's Chicken both own, I thought, "Man, those chicken & waffles sound good. Should have gotten that for my main lunch. Oh, well... next year!" 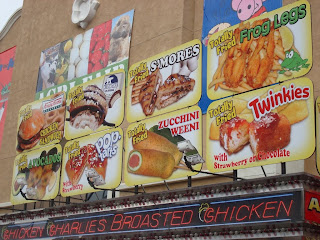 Then, I look over to my left at the large pictures of the fried offerings. I thought, "Well, I'm going to go with the O.G. deep fried treat that was introduced a long time ago. The Deep Fried Twinkie."

I order it with chocolate sauce (as opposed to strawberry) for $3.95 + tax. I moved over to the side and expected to wait a while since, you know, they still have to hand dip it and fry it to a good crispy texture.

NOPE. Served to me in a matter of 30 seconds after I paid. They were "pre-fried"!!! Sitting out? Under a heat lamp? 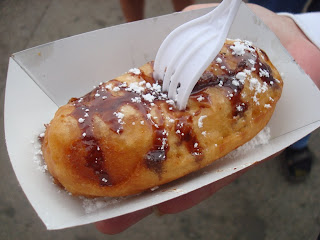 My Twinkie was hard to cut in half and the exterior was soggy. It looked like the chocolate sauce was put on earlier too! It was warm (thanks, heat lamp) but it was cooling down really fast. I picked it up and took a bite. It basically was nothing to write home about. It tasted like a darn Twinkie. I mean, hey, I did expect that flavor with with a little something extra -- like the crunch of the batter. It certainly was a disappointment and will not be getting that ever again.

Clouds were coming in, traffic on the 5 South was piling up, and we were drained from the sun and walking around. We did have a great time at the San Diego County Fair, with only a couple of disappointments... the deep fried Twinkie ... and me eating too many cookies.

LOL, I know... when you guys had those last year, they looked gross!

I've always wanted to try the brisket sandwich..I wonder if I'll have room for my next trip to SD Fair. Hash dog looks good..and the fry bread with sugar (I got the one with buffalo chicken and didn't like it as much)

I totally agree about the Tasty Chips. They are BEYOND delicious!

@Kirbie... I was pretty impressed with the brisket. Don't bother getting the "combo". The slaw and the beans looked pretty sorry. Hash dog was yum!

@Kristin.. thanks for stopping by! :) I can eat Tasty Chips ALL day... only if they had french onion dip, but I'll settle for the nacho cheese!

I don't think I've ever had the Tasty Chips - they will be on my list to try next year, though! I was just happy we got through the fair (and the evening) without any puking. Last year for Ryan was a bit brutal. Fried foods and rides will do it to ya!

Glad that Ryan didn't get sick this year! Yeah, potato chips are my fave snack (with onion dip) so having them nice & freshly made at the fair is so darn yummy! Will you be blogging about your fair experience?