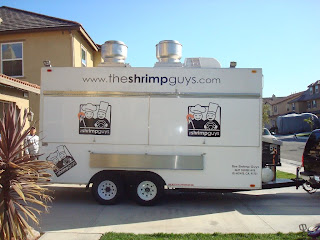 When my family and I found out at Lucas' (my second cousin) 2nd "Yo Gabba Gabba" birthday party that they were going to have BOTH the street taco lady AND a shrimp truck, we were so darn excited. You don't even know! I mean, who does that? My cousins do and it was freakin' awesome.

It was certainly a happy day for my tummy.

theshrimpguys truck was started by my cousins' friend, and models those fabulous shrimp trucks that you see in Hawaii. I've seen a few and eaten at Macky's in the North Shore (see my Hawaii blog post), and it was my FAVE meal in Waikiki. So, you can imagine my reaction to the thought of a similar shrimp truck arriving and setting up shop in their driveway.

When there was word that they arrived, we all went outside to witness what we called (don't laugh) an "epic" event as they backed up the truck and got all situated. The shrimp guys prepped away for a good hour before opening up their truck to reveal the serving window. 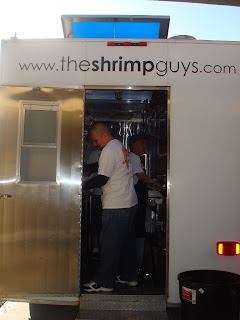 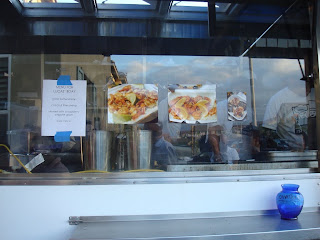 Quickly a line formed, and Mike and I hung out for a while before hopping in line. They printed out a personalized menu (attached by painter's tape) of the delicious goodies they were going to serve the excited guests. 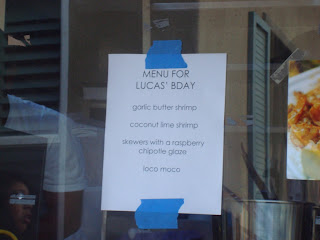 I knew exactly what I was going to order to reminisce about my garlic butter shrimp in Hawaii. Mike ordered the same thing. Grace & Jeff let us sample their coconut lime shrimp, loco moco, and raspberry chipotle glazed shrimp skewer. 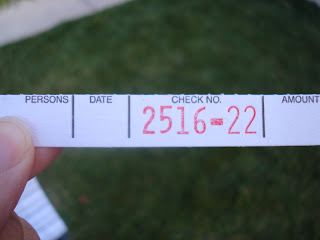 My parents ordered before we did and lookie here, my dad's loco moco is served. Oh, looked so good! Loco mocos are a traditional Hawaiian dish which consists of steamed white rice, a grilled hamburger patty, topped with a fried egg and brown gravy. I have never been disappointed by any loco mocos I have eaten. The meat was tender and brown gravy with sauteed onions was succulent. I created perfect bite that included all ingredients, even the yolk. Yum. Something told me for a second that I should have ordered this, but I held true to my garlic butter shrimp. 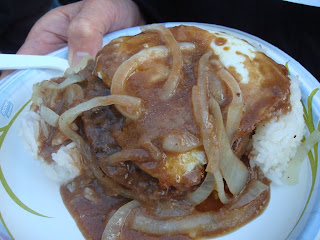 I like coconut - but I don't love it. When I think of coconut in somewhat an "Asian" dish, I think of panang curry, and I do not like the taste of curry. You just read my entire logic of why I did not order the coconut lime shrimp dish. However, I did taste it and it was good. The shrimp was cooked perfectly. It did not have an overpowering flavor of coconut, but a nice balance between the sweetness of that and the tartness of the lime. 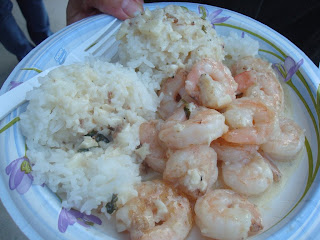 Whoo wee... the raspberry chipotle glazed shrimp had a KICK! It started off sweet and then POW, hello chipotle peppers. I do not take spicy foods well, so to a normal person, it's probably not that spicy at all. It was a good piece of shrimp, though! 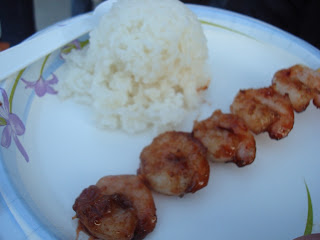 "Number 22!!!!!" That was us! Mmm... steam coming from the rice and the garlic butter shrimp. It smelled like we were in Gilroy, CA, Garlic Capital of the World. I love how they doused the sticky steamed rice with the garlic butter sauce. I examined the shrimp first to make sure that they were all cleaned well (my pet peeve) and sure enough, they passed my shrimp test. Duh-li-shus. The shrimp was cooked VERY well and it was downright yummy. Who doesn't like garlic & butter? I forgot to mention that these are nice, medium sized shrimp and they give you a good ol' portion. 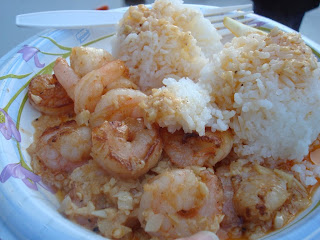 Yes, it was an unexpected food adventure this particular weekend in Corona, as I expected the usual Filipino food like the pancit, lumpia, ginataan, a big lechon pig and Auntie's crispy fried chicken bites. Oh yeah, we also did, minus the lechon, but had bonus food!

I remember u asking about Twitter. I am the one who was calling out the numbers. I'm AJ. thanks for the blog I loved it :)

Hi AJ! Thanks for stopping by. You shrimp guys are talented - thanks for feeding my tummy! 'Til next time... :)

hello janice! thank you very much for this wonderful blog! it means so much to us for you to take your time and write this awesome review! we might be at gavins bday party coming in may!...so look out for us. thanks again!

Hey Rich! My pleasure. Food is what I love and you all surely shared the love at Luc's party! YAY, see you in May!