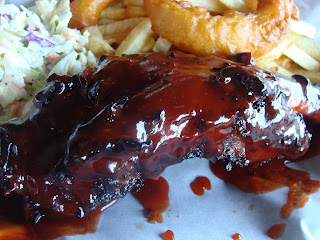 Oh. Em. Gee. Seriously, I cannot believe that Phil's BBQ has not made the food blog yet. I have labeled it my favorite restaurant in San Diego for the following reasons:
Eight years ago, my friend of the same name, Janice, asked me if I've ever been to Phil's BBQ. I answered, not realizing what I've been missing, "Nope, where's that located?" She says, "It's in Mission Hills. It's super small, but the food portions are huge and the food is SO good."
After that... I was hooked. The first thing that I have ever tried here was their succulent, brontosaurus-sized, beef ribs at, what was once, their original location in Mission Hill. I remember that the portion size for dinner was massive, and that I was in heaven. Phil's BBQ re-located to Point Loma off of Sports Arena Boulevard in a much larger space that includes flat screen TV's, a bar, and lots of outdoor seating.
We've been to Phil's BBQ many, many times, including making it a birthday tradition for me to enjoy ribs and slaw every year for a few years now. I even met and had a conversation with Mr. Pace and took a picture with him. Very nice guy!

For this particular adventure, it was a perfect Saturday and the hubby and I wanted to "get our dibs on their ribs"... yum! 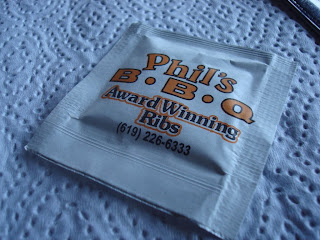 We arrived to Phil's just a little bit before noon and the line to eat inside was already outside the door. The line ended just right under the large menu sign. To us, we were in a great position. We have seen the line go all the way around the east side of the restaurant.

After less than 10 minutes in line, we were the next party to order. Mmm, we were already drooling over the smell of the BBQ'd meats on the grill. The party behind us spotted an empty table for two and one of them immediately left the line to grab it until the hostess told him, "Nope, you can't do that." One rule at Phil's... you cannot "save" a table until you order. All the times we have visited, we never had a problem finding an empty table - even at the former location which was about 1/4 of its current size. There will always be someone leaving.

We order the usual - beefy rib tickler for me and a chick tickler for my hubby. Mike took a real estate phone call while I was ordering so I found an empty table on the east side patio and sat down with our empty water cups and the pager (gotta find that seat - pronto!). As I waited for Mike to return, one of nice workers asked me if I wanted her to fill my drink cups. Wow, what great service! I thanked her and said, "Do you mind? I'm waiting for my husband and don't want to leave our table." She said, "Of course!" I was happy and impressed by that small, but meaningful gesture. Suddenly....

BZZZZZZ.... our food was ready! 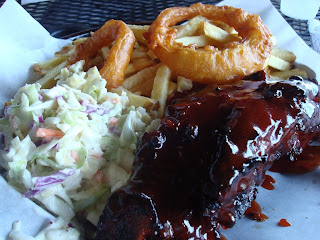 My beef tickler came with one huge beef rib drenched in that addicting homemade BBQ sauce, fresh cut french fries, cole slaw, and two onion rings - all for $6.45. Yup. A deal. Before they had ticklers, I used to get the full-on dinners. A regular beef rib dinner comes with three of these babies, so you can imagine how much food I got. That's when I strayed away from them and started ordering the small baby back pork ribs. However, just last year I went back to the beefy rib. SO GOOD.

I took a bite. Mm, the tang of the BBQ sauce, the char of the outside of the rib, and the juicy meat equaled JOY. My fingertips and the corners of my mouth had sauce all over. It's a good thing they put a roll of paper towels on each table. It gets messy - but the fun type of messy. I mean, it's BBQ, folks! None of that cutting your ribs with a knife and fork!

French fries were fresh and the cole slaw was crunchy delicious, as usual. I swear they put a little horseradish in the cole slaw dressing because there's a kick. Not sure though. As for the o-rings, you can't go wrong with the beer batter onion rings either. 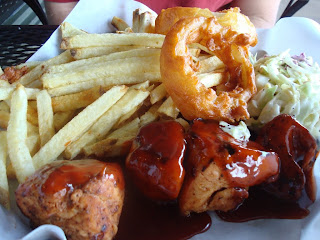 This is my hubby's chick tickler. It's the same exact thing as my tickler, but with BBQ'd boneless chicken breast chunks slathered in the sauce.

Yep, another great Phil's experience on the books. Here are few helpful tips about Phil's BBQ:
Adam Richman from Man vs. Food was just here too. Be on the lookout for that episode on the Travel Channel!

Big birthday coming up soon - so you know what we're going to have! YES.