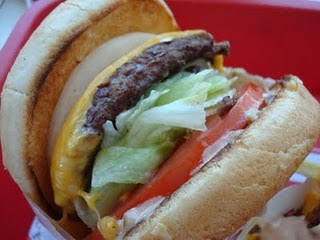 I LOVE a simple burger & crispy, fresh french fries with Heinz ketchup (gotta be Heinz). Throw in a fountain Coca-Cola over crushed ice, and I'm happy as a clam.

My hubby, Mike, and I talked recently about how I should start a quest to find the best burger in San Diego -- of course, in my opinion. I guess you can say that my taste for a good burger equals simple goodness. Meat has to be juicy, cooked perfectly and most importantly, I HAVE to taste the flavor of the meat. I refuse to let all the "extra" toppings disguise the flavor that I want the most, which is the protein. The bread is important too, as it should be soft & warm and should not ultimately be the star of the burger, but become a good fit with the meat.

So... when Smash Burger recently opened in San Diego and a lot of talk about their soft opening was all over Twitter, I decided that I will search for that perfect burger to my liking!

Here is my list of SD Burger Quest candidates (in alphabetical order ...no favoritism *smirk*):

Neighborhood
I've seen Neighborhood on the corner of G Street and 8th Avenue as Mike and I frequent downtown often since he works off of 5th Avenue. It was selected as best burger joint by local restaurant critic, David Nelson, in the San Diego Magazine's 2009 Best Restaurant issue. Caramelized onions, blue gruyere cheese, and pepper greens (arugula, I assume) are the main ingredients in Neighborhood's burger. On an unrelated note, something on the menu is calling my name: chorizo corn dogs. *drool*

O'Brothers Burgers
O'Brothers is a suggestion from a Tweeter, @Stefaniya, when I posted about the burger quest. I've actually never heard of it until she mentioned it. "O" for "Organic". They serve 100% organic beef burgers -- from the bun, cheese, veggies - every darn thing. Even the sides, desserts, and beverages are organic. Wow. This joint is also located in downtown at Horton Plaza. Huh. Who would have known? Since I cut my all my department store cards after college, I'm like, "Is Planet Hollywood still at Horton Plaza?"


Rocky's Crown Pub
Mike's real estate team leader, Ken, says that Rocky's has the BEST burger in SD. Hey, he's a former culinary graduate from NYC (jealous), so he may be onto something. Simple: 1/3 lb. cheeseburger with red onion, lettuce, tomato, pickles & mayo. They also have a 1/2 lb. and a "no cheese" option. Their lunch special is a burger, fries & a pint of beer for $9.75. No credit cards & cash only.


Smash Burger San Diego
Like I mentioned, Smash Burger is what sparked the quest, so I'm eager to try one. They take "balls" (yep, I said balls) of certified angus beef and smash it on the grill to form a patty on the fly and create that crispy caramelization we all know and love. Hence, the Smash Burger. They have a SD Smash Burger just for us that is similar to a Mexican torta. The classic comes with onion, lettuce, tomato, pickles, American cheese, their "smash sauce" (a type of thousand island or Russian dressing??) on a buttery egg bun.


The Waterfront Bar & Grill
I've heard of The Waterfront before, but had no idea where it was in downtown. Living in San Diego all my life (30-something years), yeah... I still get lost in downtown. Turns out, it's west of the Interstate 5 off of Kettner. This place was named best burger joint in San Diego Magazine's 2009 Best Restaurant issue by the editor. Looking at the online menu, their signature burger, the one named after the place, is a quarter pounder with grilled onions and lettuce.


The Restaurant at The Pearl
The Restaurant at The Pearl hotel in Point Loma has a burger on their menu called "The Best Burger in Town". That's got to mean something! Made with fresh Meyer Ranch chuck, pickles, tomatos, greens, aioli, on a Con Pane (bakery down the street) bun -- and served with those addicting pomme frites. I've had the pleasure to dine here, but have not ordered their burger.


Whisknladle
Today, I ran into Rico in my building and we immediately talked about my burger quest. The Whisknladle (WNL) Brandt burger comes with artisan cheeses, house cured bacon (mm), caramelized onions, and yup, a fried egg. Dee-lish. He swears it is the ultimate best burger -- even better than the ribeye they serve. I'm also wanting to try their crispy sweetbreads and bone marrow.


OK, the candidates below are of places that I have been to, but would like to evaluate them again in this capacity....


Burger Lounge
I fell in love with the Burger Lounge since they opened in Kensington a couple of years ago. I call it the upscale In-n-Out. Tallgrass beef, onion, homemade 1000 island, lettuce, tomato, on a fresh bun -- never disappoints. I LOVE their turkey burger with basil.


Danny's Palm Bar & Grill
Can you say "Diners, Drive-Ins, and DIVES"? Definitely a dive - on Orange Avenue in Coronado. Our friends, Jen & Jason, recommended that we try this place for their Slamburgers. They come in 1/4 and 1/2 lb and have many different kinds of burgers. From what I remember, the meat was dee-lish and flavorful and at the time, I was super impressed.


Hodad's
I've been here once. When Mike and I started dating, he took me here and I remember the gigantic piece of raw onion in my burger as I sat next to strangers at a long picnic table. It was good, but that piece of onion sticks out in my mind. I heard they got rid of the picnic tables/community seating?


The Corner Bar & Grill
We had a holiday get-together here last year where I enjoyed deep fried pickles as an appetizer, a burger, fries, and tator tots. Good, not memorable -- but I'd like to give them another try.


SO, the quest is on. You know how to get a hold of me if you have other suggestions for my specific food adventure!


*NOTE: May take a while -- I eat relatively healthy during the week and indulge one day a week. :) But, regardless, THANKS for following me in my quest to find the best!!!
Posted by Janice D. at 5:03 PM

One suggestion that is fun amongst friends is to try the places and give them star ratings and do one final unveiling of the winner.in the event of a tie, fries are used to break a tie.

GREAT idea, Rico! I created a note on Facebook. Check it out...

Have you ever been to the Red Fox Room, or Tivoli's Crazee Burger? Both in the University Heights/North Park area, and both definitely worth a try!

PS: Thanks for the wave, great blog you've got here too! :)

Thanks, Jen! I've seen the Red Fox Room, and we've been curious. You've also reminded me about Western Steakburger in the area. :)

Wow, you've got lots of burgers to bite through. Let me know of your future stops, I want to join in and devour some veggie burgers.

My favorites are Boomerang's Gourmet Burger Joint in Clairemont or North Park newbie, SoHo Bar and Grill at 3025 El Cajon at 30th.
Also, of note around the corner to the south, (Tioli's) CRAZEE BURGER with their best seller, the venison burger.
SoHo has unbelievable housemade chips from three different tubers; the others have great fries, plus Boomerang's has numerous other outstanding potato, and other dishes.

Hey Chuck! Boomerang's made the final list because you mentioned it to me a while back -- so, thank you! Haven't been yet, but can't wait to try it! Gotta put SoHo on my adventure list. :)