When you think of Indian casino dining, you may think of buffets, food courts, $1 hot dogs, free soda & coffee, and that one 24-hour cafe/restaurant that serves meals all day, every day.

The Sage Cafe is given the label of that "24-hour restaurant" located at the Barona Valley Ranch Casino in Lakeside, CA. However, the dining experience here is much more than just a diner type eatery where you can get a greasy burger, fries, and a Coke for a few bucks.

Sage is located at the back of casino in the non-smoking gaming area, near the hallway that leads to the guest rooms. The waiting area near the hostess stand resembles a living room with comfortable recliner chairs and sofa and a fireplace. The dining room has a large window to the left that overlooks the beautiful green golf course.

When Mike and I received a $40 food credit in the mail for the casino, it was an easy decision to have dinner here after work before it expired. We chose the cafe rather than the buffet, because we did not want to stuff ourselves with cuisines that don't go well together. We actually wanted a nice sit-down meal after a hard day's work.

The Sage Cafe has a simple menu of comfort food favorites, steaks, seafood, sandwiches, a build your own burger option, breakfast items, and even a section for Chinese cuisine. 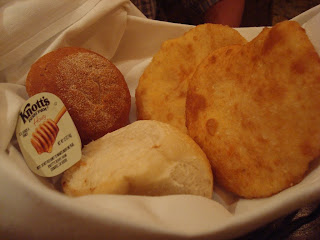 After we ordered our beverages, which is usually ice water for me, and an iced tea for Mike, our bread basket arrived. Oh, this isn't no ordinary bread basket. Indian fry bread. Yes, that's right. Fry bread. Ours came with two delectable pieces of fry bread, and two "not-so-fun" dinner rolls, white and wheat. Every table in the restaurant has two shakers of cinnamon sugar and confectioner's sugar for these fried treats. As you can see, they also give us little packets of honey. 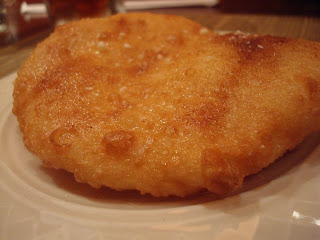 It was still warm when I bit into it. I put a little cinnamon sugar and confectioner's sugar, and drizzled a tad of honey. I prefer it with just the sugars, but wanted one bite of it with the honey. It was delicious. It could definitely have been a dessert, but we are happy that they serve this before our appetizer/meals arrived. 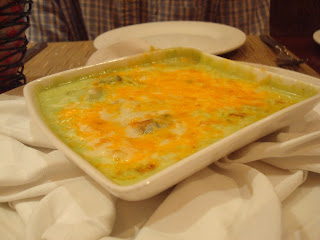 This is the roasted garlic, spinach and artichoke dip. It's served with toasted pita chips that are cut into large strips and placed inside a "cone" basket. In the picture, it looks like guacamole with cheese on top. This dip has the consistency of a bechamel (cream sauce) because once we dipped the pita chip, it coated it and the excess rolled off. It's like they over-blended the spinach and artichoke. But you know what? Who cares, because this dip is so darn good! You can definitely see and taste the chunks of sweet roasted garlic and whatever they put in it besides the ingredients stated above is beyond me. Yum. I told Mike that I'm going to try and mimic the recipe.

All dinner entrees come with either a wedge salad or cup of soup. Because I ordered the fish n' chips, I wanted crunchy cole slaw. Our server was sweet, and said that she would check with her manager to see if it was OK and of course it was. I forgot to take a picture of the cole slaw, but it was served in a cute little white ramekin. I could definitely taste the red wine vinegar in the dressing, which didn't bother me. It was a good side of slaw. 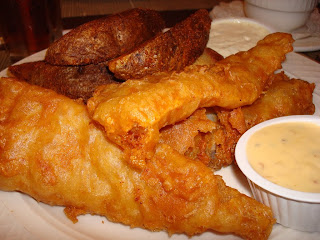 Holy moly! Now, this is a massive plate of fish n' chips! There were three large pieces of white cod fried in a stone ale batter, a whole freakn' potato served in big potato wedges, and a duo of sauces, tartar and a remoulade. The fish was awesome. The batter was light & crispy, and there was actually fish inside. The fish tasted fresh and the sauces were spot on. The "chips" weren't my favorite. I'm a "shoestring" kind of girl, so the thick cut fries aren't my thing, especially this thick. They weren't even fried either - baked. Healthier, but when you're ordering fish n' chips, I expect fried items. Good, though, but I only ate two of those, considering the size of both equals a half of a medium sized potato. 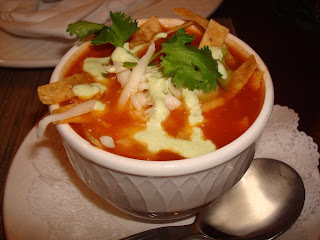 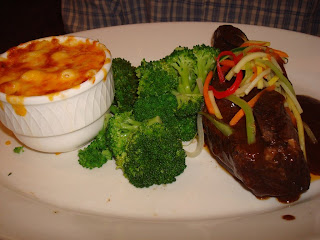 Mike ordered the chicken tortilla soup to start, and for his entree, the beer braised short rib with macaroni and cheese and a vegetable. The entree actually comes with green beans, but the last time we came here, the green beans were barely even cooked and were blanched too early. He opted for the steamed broccoli instead. The short rib fell off the bone and was flavorful. The mac n' cheese was creamy and well-done.

We skipped dessert and paid our couple bucks (our balance from the $40 food credit) plus 20% tip for the service before we sought out a few slot machines calling our names.

I believe, that evening, we came out beating the casino for once, but we both know that we will eventually give it back. *wink*
Posted by Janice D. at 6:21 PM

Jan, I LOVE this restaurant at Barona! When you're ready to make the drive for second meal, I'm going with you. I'm still craving for that hot Indian Fry Bread!