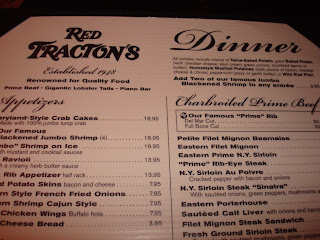 It is always a special treat when Doyle, Mama Linda, and Isabella (their cute, well behaved, smart Portuguese Water Dog) come to visit San Diego to stay with us for a few days. It is a time of family bonding, relaxation, and good eats! They are from Phoenix, a city we frequently visit also, but this time it was their turn to visit.

On a beautiful Saturday evening in San Diego, Doyle's friend suggested that we have dinner at Red Tracton's Steakhouse in Del Mar, right across from the Del Mar racetrack. The races are occurring right now and have heard that this is a great place to go after throwing out exacta or trifecta bets on a few horses. We didn't visit the track that afternoon, but we were well on our way to Red Tracton's before the last race ended.

Valet took care of our vehicle and we walked in the restaurant that has been open since 1948. The host immediately greeted us and showed us to our table in the main dining room just past the bar. The inside of the restaurant reminded me of two other old school steakhouses, The Butcher Shop and Bully's. However, Red Tracton's has been open longer than both of them. The interior is very dark, has lit candles on the tables, and large portraits of jockeys and horses on the wall. I liked the old feel of the place; a place that has history.

Our server was nice - and looked like she's been a server here for years. She knew what she was doing and people were not going to mess with her. We ordered a round of cocktails, a couple of margaritas over ice with no salt for Mike and with salt for Linda, Doyle ordered a Bombay Sapphire martini, and a "faux" martini for me... a lemon drop martini. It was delicious, especially with that sugary rim. 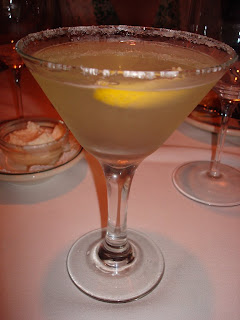 We received a warm basket of sourdough bread and softened butter before we made our dinner selections. The bread was chewy, but in a good way. Sourdough is supposed to be chewy and it was a good piece of bread.

Of course, I did peruse the online menu before actually coming here, but for once, I didn't know beforehand what I was going to order. We had brunch just about 4 hours before our dinner reservation so I wasn't starving and did not want anything to put me over the top. Everyone at the table started off with the "famous" lobster bisque. 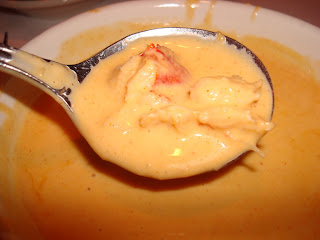 The lobster bisque came out in the traditional soup bowls with the handles, accompanied with a little server of sherry and a package of oyster crackers. I never put in oyster crackers in my bisque or chowder. I like how the soup tastes without it. I poured a little sherry over my bisque, stirred, and took a sip. Yum... warm and flavorful. The lobster stock and cream simply melted in my mouth. Mike pointed out how big the lobster chunks were, and I immediately had to take a picture. It was a great start to the meal. The only thing I didn't like was that my bowl had soup running over the sides - which means the kitchen staff just poured messily. I forgave them after the first bite. 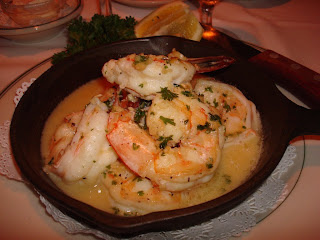 As a lighter meal, I ordered the jumbo shrimp scampi, sauteed in white wine, lemon, and garlic and served in a cute cast iron skillet. I would have loved to have a charbroiled ribeye, but I was just still too stuffed from brunch. The shrimp, surely, was jumbo! I believe that six big ol' ones were served to me on that little skillet. I took my fork and knife, and cut into half of the large prawn, dipped it into the buttery, garlic sauce, and.... I thought that the shrimp was a bit overdone. It wasn't soft, juicy, and succulent I would have preferred it to be... so it was just okay. Tasty, but I wish it was undercooked so it would finish cooking in the sauce to be the right texture for me. 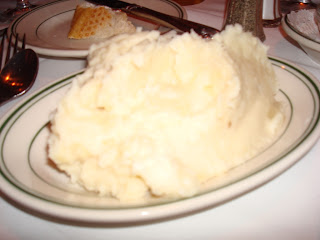 This isn't a good pic of our homestyle mashed potatoes in "garlic butter". We had a choice of getting the mashed potatoes with either bacon, cheddar cheese, & chives, peppercorn gravy, or garlic butter. For me, the choice was between the bacon or the garlic butter - however, because I enjoy the flavor of garlic, especially a sweet roasted garlic, I chose the GB. Let me tell you that this is the first time EVER, that I have thought a dish was spicy because of raw garlic. I thought that the taste of these potatoes would have gotten better if I kept eating to see if there's a better "part" of the mound I should eat. Nada. I couldn't eat it anymore. I stopped after three bites. The raw garlic flavor was so powerful, that it wasn't even good. Go for the bacon - everything's better with bacon, right? 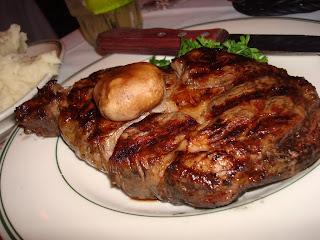 On the other hand, their charbroiled rib eye steak was AMAZING. This is what Mike and Doyle ordered. I had one bite of his delicious, well-marbled piece of protein. It was juicy and cooked to perfection (medium rare). I would definitely come back here, avoid the garlic mashed, and order the rib eye without any hesitation and before I even order a drink! It was THAT good. Props to them for picking the winning entree! 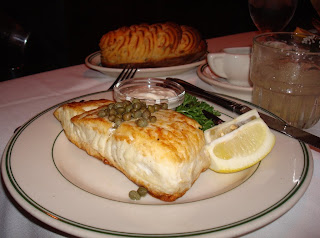 Last, Linda ordered the "Catch of the Day" which was a sauteed halibut served with capers, lemon wedges, and tartar sauce. For a side, she ordered the twice baked potato, which tasted like it was a "thrice" baked potato. You can tell that it was sitting under a hot lamp for quite a bit because the flesh of the potato wasn't moist and fluffy anymore. The flavor was just OK, but you know what? I would have eaten this instead of the mashed potatoes!

Overall, I would go back for that yummy steak, lobster bisque, and for the atmosphere. I liked the old feel of it. The personnel were very friendly and the host even ran after us while we were waiting for valet because I left my Sony camera case on the chair. That was very considerate and nice of him to do so.

The place was slowly getting busier as the races were ending and we left before the dinner rush started. We headed back down south for a little frozen yogurt and to relax for the rest of the night.

A great evening, indeed... however, I think I lost my nice sunglasses that same night. Oh, me.
Posted by Janice D. at 10:16 PM