Abel, our dear friend who moved from San Diego to Denver, Colorado, flew in for the weekend to attend a wedding. He asked Jen, Jason, and I, to meet him at the Lei Lounge in University Heights, just down the street from the Parkhouse Eatery.

This was my first time at Lei - and I was excited to try a new restaurant. We arrived just before the clock hit 11:00 AM, the start time for brunch. Coincidentally, we ran into a few friends who came to celebrate a birthday and chatted with them right before the doors were unlocked.

Walking through the restaurant, there's a bar to the left with a flat waterfall feature on the wall. Very cool. There were belly bars on the right. The hostess stand was stationed passed the bar, and the dining room was outside. It had very trendy, cool eating booths on both sides of the outside area, where it has a flat screen, pillows, and comfy soft benches to sit on. The booths were draped in fabric, giving it a V.I.P. club feel if we were there in the evenings. The birthday boy, Scott, and his friends sat around a couple fire pits booth under umbrellas. We were seated on one of the white clothed tables in the center. I wondered how business would be if it rained. The umbrellas protected about 70% of us.

Our server was sweet, but made friendly fun of me for ordering coffee (I was sleepy!) instead of a $3 cocktail or bloody mary! Actually, Jennifer told him that I stayed up all night the evening before.... "until 10:00 pm." Thanks, Jen. It was funny that he came back telling me that he had to still brew coffee, um, since I was the only one in the restaurant ordering freaking coffee.

Looking at the menu, it was a toss up between the Monte Cristo sandwich (between two pieces of french toast), stuffed french toast, or the traditional eggs benedict. *drool* 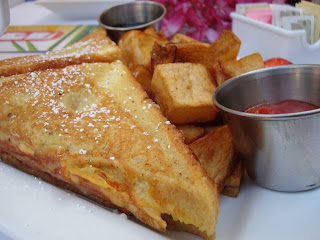 As you can see, I ordered the Monte Cristo sandwich. Yum. In between the delectable slices of warm french toast, it had turkey, canadian bacon, and cheddar & swiss cheese. It was served with crispy potatoes, a side of Heinz ketchup (I know that flavor), and a side of maple syrup. I poured just a little syrup on the edge of the sandwich, and cut a piece of the corner, forming a mini triangle. There's just something about a sweet and savory dish that my mouth cannot resist. Sweet from the maple syrup and savory from the canadian bacon & cheeses meshed together. The potatoes were good too... simple and cooked right. 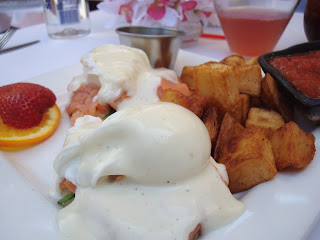 Abel ordered the salmon benedict. Ohhh, smoked salmon, spinach, lemon cream sauce over a toasted english muffin. It was served with a side of roasted tomato salsa and the crispy potatoes. Of course, he cleaned his plate and said it was delicious. It looked really good and something that Mike would have definitely ordered if he didn't have to show four houses that morning to clients. 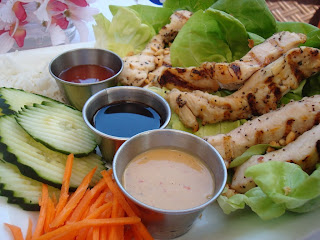 Jason ordered the thai chicken lettuce wraps with a trio of sauces... sweet & sour, soy based, and a peanut sauce. He was satisfied with the choice, but he said that he didn't care for the sweet and sour sauce. I hope that was the right one - I have a 33.3% chance that I'm right! 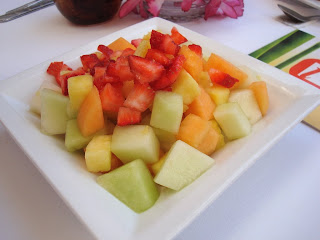 Jennifer, being a good follower of Weight Watchers, ordered a pretty dish of fruit. You can't go wrong with a dish of fresh fruit!

Lei Lounge was a nice place to have brunch, and it looks very promising and fun to have a late night drink and chill with your friends. Just don't be that person to order coffee when everyone else is drinking beer or a cocktail. Just kidding. I was sleepy, darn it!
Posted by Janice D. at 5:00 PM