L to R: Flowers at Jackson Square (see the Andrew Jackson statue in the background?), New Orleans' famous Cafe Du Monde, Byron Scott and I (my favorite NBA player of all time), and end of mass at St. Louis Cathedral

New Orleans, Louisiana, is such a culinary place to be. I was excited to try home style Cajun & Creole cookin' and traditional french cuisine, and at the same time indulge in chicory coffee & fluffy beignets. We were there for a work conference (actually, the hubby had a conference - I tagged along for the ride) in March of 2008, almost 3 years after Hurricane Katrina destroyed a majority of the city. We stayed in the French Quarter, the touristy part of the city, just a few blocks away from Bourbon Street.

We arrived on a Sunday evening, which surprisingly most restaurants closed at 9:00 PM or earlier. After getting settled in our hotel room, we went out to search for grub nearby. Since Bourbon Street was down the block, we wanted to see what it was all about. Without going into details, I can see how it can be fun for those who want to party and just enjoy life. Most restaurants in the French Quarter were closing already, like Brennan's, Palace Cafe, ACME Oyster House, so we decided on a spot on Bourbon Street, called La Bayou Restaurant. It was open late, and we were hungry! 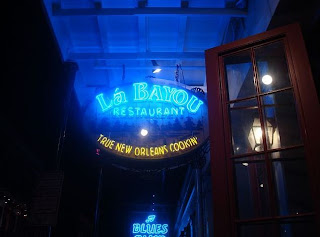 We both started off with a cup of chicken & andouille gumbo, and each got a po' boy. Mine had fried oysters, and he got a shrimp po' boy. Way to start off with a traditional po' boy, right? 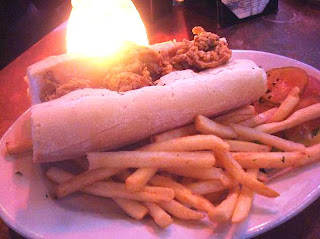 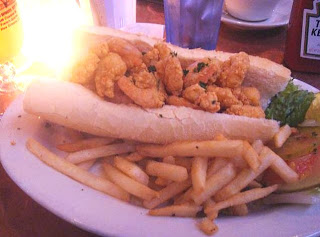 WRONG! Truthfully, both po' boys were just OK. Bread - eh, nothing to write home about. The shrimp had a funny after taste, and the oysters were so-so. Overpriced for something simple like this, but hey, it's a restaurant ON Bourbon Street, very tourist-friendly, and open later than others. The gumbo was pretty tasty, though. It was the perfect temperature, and the flavors meshed very well. I should have gotten a bowl of the gumbo instead. We also had hurricanes with our meals too. We spent way too much for the quality of food here. We kicked ourselves for not meeting Lynn and Abel at Mother's.

We stayed at the New Orleans Marriott, which was fabulous, spacious and every staff member was friendly. In the morning, I ordered the tastiest breakfast via room service (yes, I was lazy), and man, it was worth it! 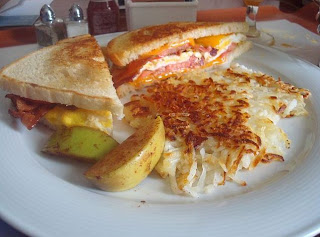 This is the "Broken Yolk Egg Sandwich with Cheddar Cheese on Sourdough". I was sold immediately after I read the description on the menu. Can't beat that with a bat - especially when it comes with bacon and ham. It was served with a side of cinnamon apples and hash browns. 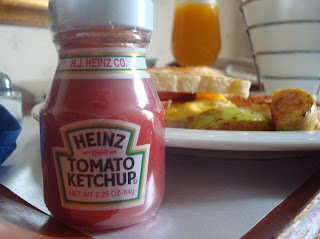 Here's a little side tidbit about me. I only eat Heinz ketchup. None of that Hunt's, Del Monte, or even a generic brand - watery, too dark, yuck.. no thanks. The only non-Heinz ketchup I will eat is the McDonald's fancy ketchup, but that's only with McDonald's fries. I know...I'm weird. 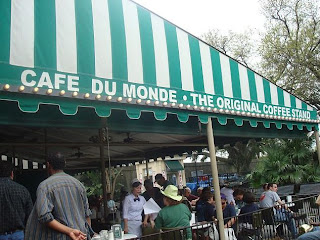 The famous and original Cafe Du Monde is located in the New Orleans French Market, right across the street from Jackson Square. I took a walk one brisk morning and ended up here by accident. This original Cafe Du Monde was opened in 1862 at the very same location. Cool, huh? Even cooler... it's open 24/7, except on Christmas Day.

I waited until the next day before I got delicious, fresh beignets with Abel, Amanda, Jameson & Mike. 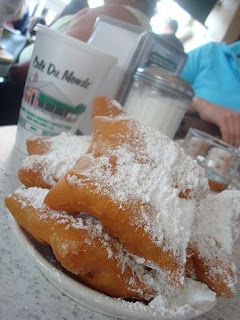 The five of us all had puffy beignets, coffee, and hot chocolate. Seating is first come, first served, and it's always packed. You kinda have to stand around, and "park" behind tables that you think are going to get up and go. The service is quick, and there's just way too much going on here (in a good way). Beignets are deliciously perfect, though!

You're not going to believe this, but this is the most absolutely delicious thing that I have ever eaten. Here, in New Orleans, Louisiana - located in the Hilton New Orleans Riverside, is a restaurant called Drago's Seafood Restaurant & Oyster Bar. 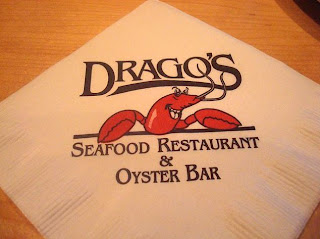 They are famous for their CHARBROILED OYSTERS. Think combination of garlic, butter, herbs, and what... parmesan cheese? Yes. Oysters over an open flame with this combination of flavors. This was our last night in New Orleans - our special dinner. We ordered a dozen charbroiled oysters as an appetizer. I tell you, the next time we come here, I'm ordering a whole dozen just for me. They're THAT delicious. They serve it with crusty french bread so you can sop up all that buttery herby goodness.

For our main course, we each had a whole Maine lobster stuffed with angel hair pasta and seafood. 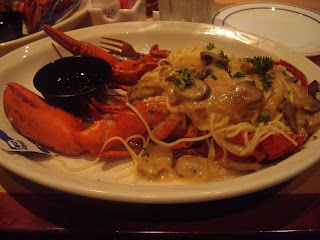 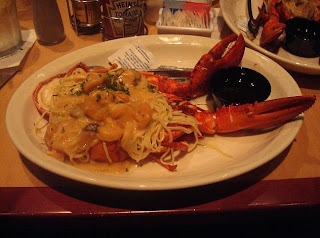 Funny, because he got the Lobster Marco, which is with shrimp & mushrooms, and I had the Lobster Empire, with oysters & mushrooms - the same type of seafood we each got with our "just ok po' boys".

Our lobster dishes were served with drawn butter. It was surprisingly not heavy at all, as heavy as it sounds with words like pasta, cream sauce, butter, and lobster. Oh, yeah... we made sure that all that lobster was removed and put in our stomachs. Oh, Drago's... how I miss thee.

During our trip, we also enjoyed an andouille sausage po' boy & nachos at the New Orleans Arena when the Hornets beat the Bulls 108-97 on St. Patrick's Day (Reggie Bush & Kim Kardashian were in attendance), a fancy dinner at Brennan's with work colleagues & architects where we had our first taste of turtle soup and table side Bananas Fosters (where it was created in 1951 by Paul Blange), and an outstanding bleu cheese burger at 5 Fifty 5 inside the New Orleans Marriott.

We do miss the city, and hope to visit again soon - this time going to Mother's Restaurant, Commander's Palace, to Drago's again *DROOL*, and to hopefully meet my favorite all-time NBA basketball player, Byron Scott -- if he doesn't get a coaching job somewhere else, like Sacramento. Boo!
Posted by Janice D. at 9:29 PM